The Decline & Fall of Civilization is Upon Us 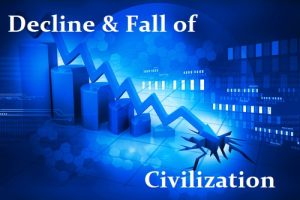 I am french and have attended a conference of technology in Germany last weekend, in which Barack Obama attended as a guest speaker.
Though I am not American nor Republican, I was really surprised by the tonality and the comments different American speakers voiced during the speeches about Republicans and Donald Trump : uneducated, in denial, egocentric, dumb,… a speaker even said she regretted not having offered a “Dump Trump” sweater to President Obama (quote). I was really surprised to see the level of undisclosed hatred being displayed in a business/public event..

You are absolutely right, the gloves are dropped now, and 2020 will be hectic in the USA…
Thanks a million for your blog and your insights, you are a true teacher to me

REPLY: I have never seen a worse political divide. There is no going back. The 2020 election is going to be the most violent and nasty election in American history. There is just no way to return to civility. The hatred is brewing and that will erupt into violence.

From my study of history, it appears that this is just part of the cycle in how empires, nations, & city-states collapse. The very purpose of civilization is that there emerges a synergy that is greater than an individual can create alone. You no longer need to bake bread because someone started a bakery.

However, when society turns in upon itself, that is the end. It is no longer beneficial to remain in a collective group. We are rapidly approaching this point and that erupts into separatism, which you are witnessing everywhere around the globe.