The 2020 Elections & the Coming Violence 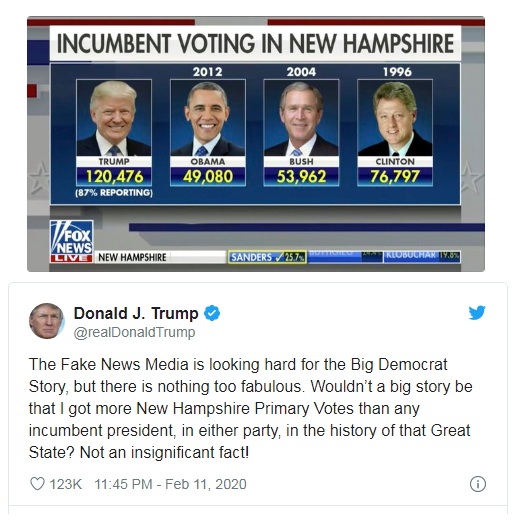 Democracy is dying and it just looks like we have to go into the crash and burn. President Trump won more votes than any incumbent ever in history in New Hampshire. His rallies attract more people than any other and in most cases, all others combined. The Democrats have adopted such a left-wing agenda that it is truly scaring the “silent majority” who most often are never represented in the polls.

In the Democratic camp, Bernie supporters realize that the game is rigged. There are fears emerging among Bernie supporters that his nomination will be stolen like the last time. They fear that party-bosses claim that they have rewritten the nomination rules after the nasty 2016 primary race to quell a backlash from Sanders’ supporters, that will not matter here in 2020 – watch! Last time, the influence of the “superdelegates” backed Hillary which was not represented by any democratic vote. That is how the party can ignore the primaries when they do not like the result. They are absolutely correct – they will never allow Bernie to represent the party in November.

Even Bloomberg is acting very left-wing and many see him with resentment. The common complaint is that he made all his money and now wants to oppress the small business owners with his insane environmental regulations. He thinks he can just buy the presidency and vows to outspend Trump. Hillary outspent Trump by 10:1 so 2016 showed that money was not the deciding factor. Bloomberg is a very dangerous guy for his decision on the stop-and-frisk illustrates that his claim that crime was just too high and he had to do something demonstrates he has no respect for constitutional rights. This is not a dictatorship and many see his Napoleon Complex a very dangerous. Bloomberg News will, of course, pitch him to the world just like CNN will oppose Trump regardless of who the Democratic candidate will be. My bet is on Hillary still – (OPINION).

The real problem to emerge is interesting. When Obama was elected, we did not hear Republicans claiming “he’s not my president!” Something has seriously changed. Historically, everyone who voted for the losing candidate simply moved on and that was the end of the contest. This time, the left is hell-bent on oppressing the right and this is not what civilization is supposed to be about. No matter who wins in 2020, either side will just not accept a loss. This will lead to violence this time far more than people realize.

This is just not going to end well and it is part of the collapse in confidence in the bond market and governments. CNN and the rest of the biased media are fueling this divide. They just do not care what they are doing to the nation. We are no longer a democracy or a viable civilization that benefits LIBERTY. It is all about suppressing the opponent.

This is why the backlash is becoming evident from both sides. If the winner is not respected as the president, then what is the purpose of even having a unified country? The United States becomes the Free-For-All of States. We have New York declaring it is a “sanctuary” state issuing IDs to illegal aliens who then do not pay taxes or are ineligible to vote legally? So they defend people who cannot even vote or pay taxes? Very strange thinking indeed!

« The Plight of the Democrats – Hillary to the Rescue?
Bloomberg’s Napoleon Complex or Super Sized Ego? »