QUESTION: Hi Marty,
Been reading your blog for six years now and the clarity you have brought regarding cycles and predictability of human behavior is remarkable. My question is regarding the 2020 election. You have said economics drives politics and not the other way around. With the anticipated significant decline in the US economy in 2020, wouldn’t this normally make it more likely incumbents, including Mr. Trump will lose their seats based upon a declining economy? Or would the current voter trend of distrusting career politicians trump (no pun intended) the typical cycle of bad economic times ousting incumbents?
DJZ

ANSWER: Normally, a decline in the economy will often lead to a political change. In this case, our models DO NOT support the view that the US economy will be heading straight down into the elections of 2020. We see this as turning early in 2020.

However, this next wave will be a cost-push inflationary wave and we still see the economic decline in Europe and Asia continuing. There is dissent behind the curtain at the European Central Bank. There are those who have adopted our warnings and are voicing them in meetings that continually result in bond buying and negative interest rates. These policies are destructive to the economy and have failed to “stimulate” anything other than fiscal mismanagement among the political fiscal side of things. 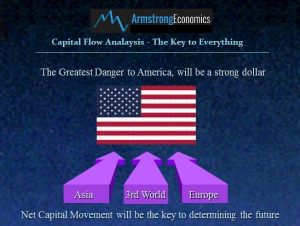 There will be a steep economic decline for Europe in 2020, which will be its 13th year down from the 2007 high. There will be a continued flight of capital into the USA that will support the dollar and the underlying economy.

Turning to the political problem of career politicians v Trump, the Democrats seem to lack any candidate of substance. Elizabeth Warren’s advisors are the European team and they support Thomas Piketty who is a modern-day Marxist.

Even looking at AOC, she won, NOT because of her crazy ideas, but because, like Trump, she was not a career politician. Scherie Murray explains why she is challenging Rep. Alexandria Ocasio-Cortez (D-N.Y.). Our model on the 2020 election for the 14th district of New York shows this has had a run of 14 Democratic victories in a row since 1992 when the Democrat Carolyn Maloney first won. That means we could lose our most entertaining member of Congress this time around.

It will all depend on the closings for 2019.