Storming the Reichstag – Another False Flag by the Government? 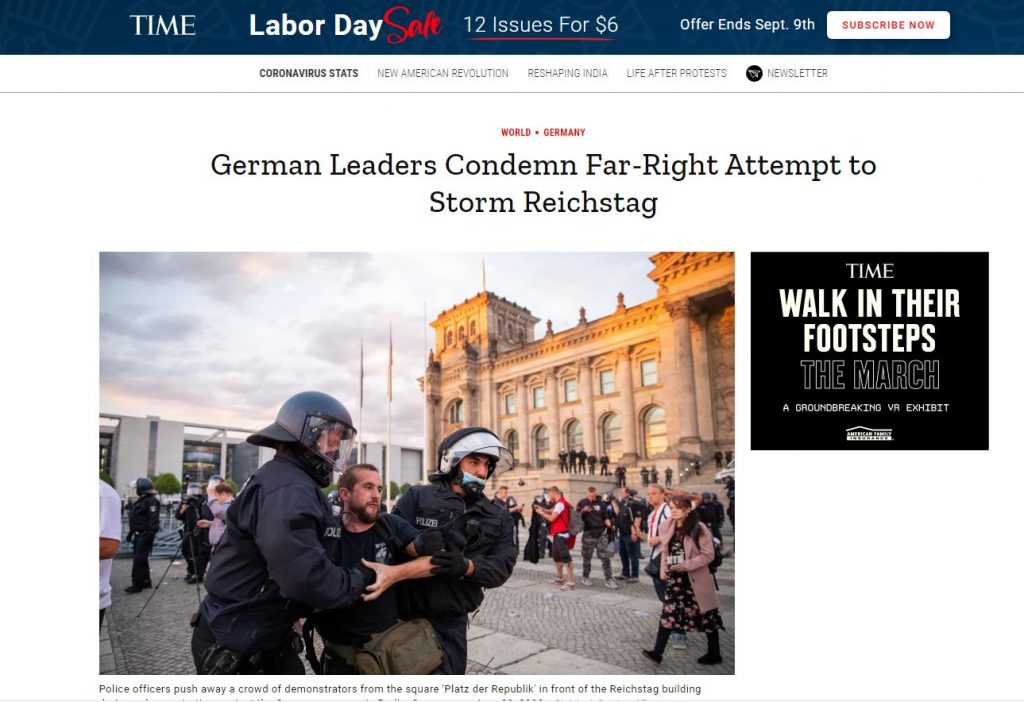 QUESTION: Hi Mr. Armstrong,
I followed the Berlin protest and was so happy that people are finally waking up, however, today, the whole mainstream media narrative in Germany is….
“Anger after (whatever group) tried to storm the Reichstag building!”
And that is all they bring on every news channel. I never watch mainstream media, but even radio, every 30 minutes they have to talk about a the people who tried to storm the Reichstag.
Are people that stupid?
If the mainstream media wanted to smear mother Teresa, they would plant someone to push her, harass or threaten or whatever and with cameras ready, film her angry or scared reaction and push the narrative that she is a monster. Without a doubt it would work.
They are focussing on one aspect of the demonstrations in Berlin and painting everyone with the same brush. Right wing nuts who want to take over the government.
Like they did in March when it was more known what Bill Gates is up to.
The media here in Germany had a smear campaign and laughed about how absurd it was…the tactic was to say, in a condescending way, “yes these crazy conspiracy theorist somehow believe that …
1. Bill Gates wants to depopulate the planet
2. Was banned for experiments in India
3. Wants us all chipped (the above 3 are true)
4. And THEY believe he is a reptile (which is so stupid no one would believe it)!
AND with that they smear 3 facts with an outrageous bogus statement and it automatically takes away the any validity of the 3 truthful facts.
The press and mainstream media truly are the enemy of the people.
It is so annoying to see and so many people are so easily fooled.
Is it really that easy to fool the masses? We will be herded and chipped and digital money will happen. I lose so much faith when I see what they pump out on mainstream propaganda channels worldwide.
Do people not think for themselves anymore? The lies seem and misinformation seem so obvious and almost expected!

ANSWER: The few people that stormed the Reichstag were most likely hired to do so in order to discredit the entire movement. It was less than 100 people out of hundreds of thousands. This is a standard operating procedure. The government creates that story and then they are on the phone to the press who only report that to discourage others from ever joining a march. The press is in on this and they are doing everything in their power to subjugate the people. This type of movement ends only in bloodshed.

Let us not forget that what happened in Germany on February 27, 1933, was another attempt by the government to justify suppressing the people. They argued that a sizeable portion of the parliamentary building in Berlin, the Reichstag, went up in flames from an arson attack by Communists. This justified the entire Nazi movement. It was staged as this one smells exactly the same. There were so few people involved in this incident that they were probably hired.

In the United States, pallets of bricks were being bought and delivered around cities by Acme Brick Company, which was bought in 2000 by Warren Buffet’s Berkshire Hathaway. Perhaps that is a coincidence and many blamed Buffet because he is in league with Gates and was part of his secret meeting to reduce the population of the world. Perhaps Buffet wishes he were an Egyptian Pharoh who when he died, everyone else in his court was killed to assist him in the journey for the afterlife. Perhaps he wants to reduce the population sho he too has some company given he is now 90 years old. But there is no question the bricks came from Buffets’ company.

The fact that someone was buying all these bricks to assist rioting and looting is clear evidence that someone is funding these riots and they are not simply people on the street. Nobody will dare investigate because the source is obviously political. Snopes, the pretend left-wing fact-checker, claimed this was “mostly false” because “It is possible that protesters themselves could have strategically placed bricks in easily accessible spots to facilitate causing property damage, though no evidence proved that was indeed occurring.” Who is paying for all these bricks? It seems this would have been a very easy thing to investigate – subpoena their sales records at Acme. Instead, they only denied that Buffet or Gates instructed them to deliver the bricks.

“Acme Brick Company is in the business of building, not destroying,” the group said, adding that it “has not done, and will not do, anything to intentionally promote violence.”

“Neither Warren Buffett, Bill Gates, nor anyone else at Berkshire Hathaway directed us to position brick for an unlawful purpose,” Acme added.

Notice what they are doing for they only denied Buffets or Gates while protecting the buyer. The press calls everyone accusing Acme are conspiracy nuts. Nevertheless, they avoided just answering the question. Who paid for the bricks? It is highly doubtful that anything would trace to Buffett or Gates. They are not that stupid to allow a trail. So who paid for the bricks?

If we ever really had honest investigations, we will find out that this storming of the Reichstag and the buying of these bricks will all trace to those seeking to gain political power.