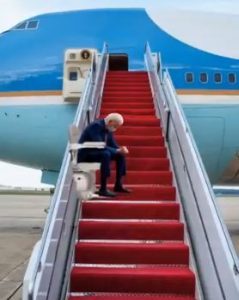 Senator Bill Cassidy (R-LA), who is also a physician, has suggested that the US begin implementing cognition tests for government leaders. “I’m told that there have been senators in the past who, at the end of their Senate terms were senile,” Cassidy said in an interview with Axios on HBO. “I’m told that was true of senators of both parties.” Knowing that these are the people who were or have been in a position to alter your life drastically should absolutely frighten you.

“It’s usually noticeable. So anybody in a position of responsibility who may potentially be on that slope, that is of concern. And I’m saying this as a doctor,” Cassidy stated. He does not mention any names, but it seems as if he is pointing to none other than President Joe Biden. Biden has leaders, citizens, and supporters concerned about his mental health. There is a reason why he is not allowed to answer unapproved questions from reporters. Democrats had no problem pointing out Joe’s obvious cognitive decline while competing against him. “There are definitely moments when you listen to Joe Biden and you just wonder,” Senator Booker (D-NJ) once said.

Former President Trump was quite pleased with his results on the Montreal Cognitive Assessment, which is designed to detect cognitive impairments such as Alzheimer’s or dementia. “I got a perfect mark. And the doctors said, ‘Very few people can do that. Very few people get that. You understand,’” Trump told reporters. The test measures cognitive decline, not humbleness. “[Biden] should take the same exact test, a very standard test. I took it at Walter Reed Medical Center in front of doctors,” Trump later said. Biden refused.

Former White House physician Ronny Jackson and 14 other lawmakers urged Biden to take the Montreal Cognitive Assessment. Biden’s handlers said that he would take the test at a later date, but nothing was announced (perhaps they forgot). The bar has never been so low for the “leader of the free world.”