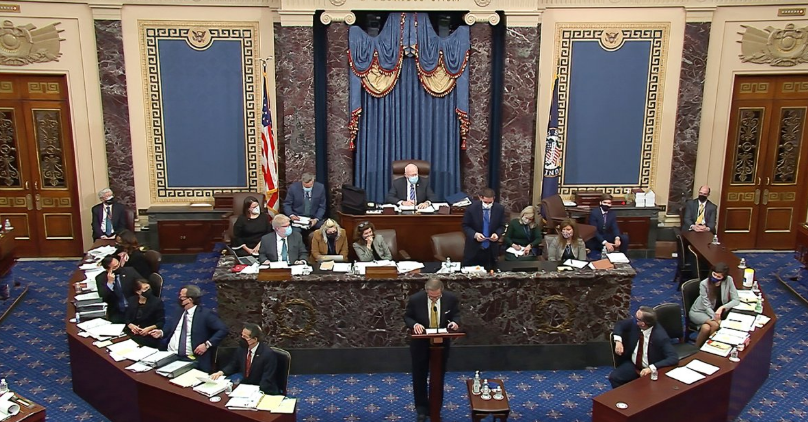 The Senate acquitted former President Donald Trump a second time Saturday after a historic impeachment trial which was totally unconstitutional since Trump was no longer President and the Chief Just refused to preside. Had Trump been impeached, he could have appealed to the Supreme Court, and then he would, at last, be able to present his evidence of the rigged election since they used that as the basis for pushing his followers onward. Personally, I would have loved to see that for then we would have a really interesting case.

The absurdity of this election was the Democrats planning to call a witness who had no direct knowledge but was simply repeating what someone else said. That is called “HEARSAY” and it is not acceptable evidence. This was not a trial, it was a political roast – nothing more. But it illustrates just how far we have fallen from a real government. The Pelosi Wall they claimed would be there for the impeachment trial because millions of people might storm Capitol Hill again. Yet the Democrats have been secretly proposing to make the wall permanent. So they stopped the Trump Wall to prevent drug dealers and illegal aliens from pouring into the country, but Nancy’s law is to protect Congress from the evil American people. Why? Because when the job losses start to sky-rocket because of their climate change actions, do they envision hoards of unemployed storming the capitol like the Bonus Army in 1932?

The polls were warning that 70% of Republicans would leave the party and move to a 3rd party. The vote was 57-43 which fell short of the two-thirds majority required for conviction. Seven Republicans joined the 50 lawmakers who caucus with Democrats and that is very disconcerting for this suggests that they will be joining Democrats on the draconian legislation they are planning to impose that will change the United States forever. These 7 Republicans are rogue and bought into this political show when they know it was illegal. If this was legal, then they could impeach Biden for acts when he was Vice President. So how would that be legal to justify removing him from office? This just gets so convoluted it is insane.