As evidence exposes that the Obama White House was spying on Trump, mainstream media is desperate to cover this up, but most importantly, this is feeding into the forecast of our model that we are looking and the decline and fall. Government is simply not trustworthy and as we see this affair will prove legally to be no different from Watergate and the Nixon scandal, except this one goes all the way to the top. We are one step closer to undermining the system, which is critical to the collapse in public confidence. Hillary Clinton told a crowd in San Francisco:  “Resist. Insist. Persist. Enlist.” All the feedback I have been getting from the non-partisan observers confirm that the civil unrest is deliberately being orchestrated to prevent any reforms that Trump had promised. It is highly dangerous to engage such class warfare and I will be issuing a special report on this subject showing this is how the decline and fall always begins. George Soros is allegedly a lead funder in this movement. Even Hungary is trying to stop Soros who is funding what others allege are revolutions in Hungary and even Poland.

I warned that reliable sources were putting the leadership role on attempting to undermine Trump squarely on Valerie Jarrett.  I further warned that Jarrett even moved in and was living with Obama turning his home into a political bunker to undermine the Trump Administration and feed civil unrest.

Now, Bloomberg is reporting that evidence has surfaced proving that Susan Rice in the White House was the person unmasking the Trump names in the surveillance. Indeed, once you create such a system that you can be pretending to be concerned about terrorists and listen to Americans even distant from such incidents, the temptation is just too great to ignore. The unmasking of unidentified Americans in intelligence reports is within the scope of the job of a national security advisor. The real question is, are there others who appear to have known who was who? This is perhaps why Obama changed the rule shortly before he left office to claim this was all legal.

The Atlantic reported on January 13th, 2017, “the Obama administration finalized new rules that allow the National Security Agency to share information it gleans from its vast international surveillance apparatus with the 16 other agencies that make up the U.S. intelligence community.” Because Obama changed the rules just before leaving, this provides cover to Rice receiving and sharing before any national security or privacy concerns were attached. 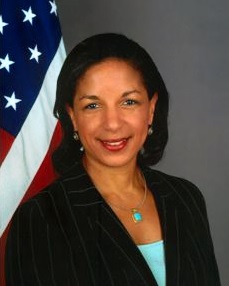 Susan Rice served as the 24th US National Security Adviser from 2013 to 2017. However, she was previously the ambassador to the United Nations. She also served on the staff of the National Security Council and was Assistant Secretary of State for African Affairs during President Bill Clinton’s second term. She was even considered to be Secretary of State upon Hillary leaving.

In has been going around behind the curtain for the past couple of days that Rice was the person who unmasked the Trump names. Rice requested the identities of U.S. persons in raw intelligence reports on dozens of occasions that connect to the Donald Trump transition and campaign. This story is just getting started. Rice reported those findings to Jarrett based upon standard protocol. The Democrats will have plenty of cover to defend these actions. They should be very careful, for whatever they have done and claim was legal, can also then be done to them.