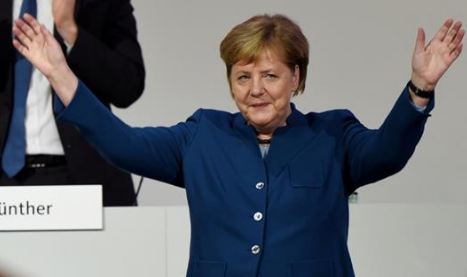 Merkel said goodbye at the CDU meeting today. She intends to remain as Chancellor until 2021. However, the victor will be positioned to succeed Merkel as chancellor and influence whether she stays or bows out before her term ends in 2021. Although Merkel is widely known for her caution and changing positions with her internal poll team, she has been a shrewd disrupter of the German party system and has moved the CDU to the middle of the political spectrum. Her downfall has been her opening up Europe to all the pretend “refugees” that poured in from everywhere but Syria. The rushed into Europe for the welfare system with no requirement for skills or language. About 70% were just young males, not families with children as the press only photographed. That single decision has been the most destructive for the European project.

The frontrunners in this election today are Annegret Kramp-Karrenbauer, who is a Merkel protege and is seen as the continuity candidate who will change nothing, so the CDU would change the face but nothing else. Then there is Friedrich Merz, who has been a Merkel rival questioning the constitutional guarantee of asylum to all “politically persecuted” and believes Germany, Europe’s biggest economy, should contribute more to the European Union. These are very stake differences in policy but this is NOT a public election but politicians who decide. Party leadership is typically the springboard to the chancellorship so this is really a critical decision for the CDU.

« Will the 2020 Presidential Election be the Most Violent in American History?
Annegret Kramp-Karrenbauer Replaces Merkel »