Merkel May Be the Worse Politician in all of History 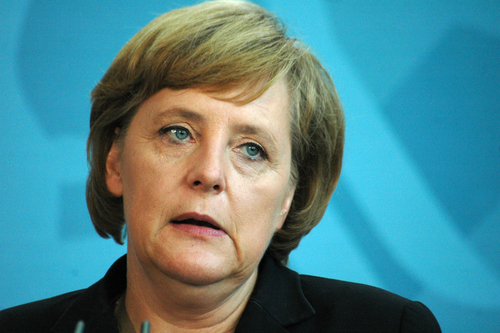 Germany’s Chancellor Angela Merkel has got to be the worse politician in history when it comes to understanding the economy. Merkel has ruled out any state assistance for Deutsche Bank AG in the year heading into the national election in September 2017 according to Focus magazine citing unidentified government officials. Merkel is just incapable of making any rational decisions whatsoever. This policy means any German who has money in Deutsche Bank is at risk and she may set off a major banking crisis if there is a run on the bank in mass. She is also saying that by no bail-out, government is not responsible for this crisis. They have been bribed by banks to begin with to allow them to do whatever with a relaxed regulation standard and then she wants to deny any responsibility. Her thinking that to bail them out will cause inflation that will hurt the people, she ignores that no bailout will hurt the least sophisticated people who trusted government. Anyone who reads this would naturally move their money out of Deutsche Bank. Hello? Is anyone home? Is there a light on in that dark region of their mind? Massive Quantitative Easy by Draghi buying even junk bonds has failed to produce inflation.

This is the very same policy Merkel applied to Greece that resulted in her image collapsing in July 2015 so she then opened the gates to the refugees. Merkel’s economic ideas are so devastating it is a complete joke. She will destroy the German economy for a bail-in with Deutsche Bank will shatter the German economy and most likely result in the final destruction of the euro.

If the Deutsche Bank AG goes down, we are talking about the biggest bank in Germany and Europe for that matter. She will utterly destroy the entire economy and this may be the tipping point that send massive waves of capital rushing into the dollar. She is deliberately imposing massive deflation upon Europe that no prospective quantitative easing by Draghi could possibly overcome. What Merkel has done to Europe is beyond comparison to any politician in history. This is a prime example of what we get when you put economic policy into the hands of people who have ZERO experience.

If the German people lose their savings, just how will the economy be stimulated by the ECB buying junk corporate bonds? If the PEOPLE do not spend, no level of negative interest rates will EVER reverse the economic trend. This is the worse possible decision any head of state could carry out. She will single-handedly destroy the EU and Britain may name BREXIT day a national holiday known as British Independence when this is all over.