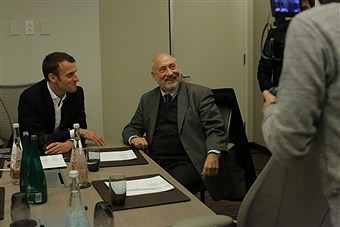 Macron’s funding reveals that elite Socialists were really behind him changing the label to sell a centrist agenda, but in reality, to maintain their agenda. Macron was able to raise funds from French abroad with the promises of change, and this targeted particularly the French who fled Hollande living in London and New York. He did a photo-op with Nobel Prize laureate Joseph E. Stiglitz before journalists who is critical of the management of globalization, against  laissez-faire economists who he classifies a “free market fundamentalists”, as well as international institutions such as the International Monetary Fund (IMF) and the World Bank.

Stiglitz is an American economist and a professor at Columbia University and is a former senior vice president and chief economist of the World Bank. He was also a former member and chairman of the Council of Economic Advisers under Bill Clinton and supported Hillary over Obama saying she is more “liberal” (socialist) than Obama. Stiglitz believes in Georgism, which is a variety of Marxism whereby the State should own all the resources derived from land, which is an old Physicocrat (French) idea that wealth is derived from land. In this way, all natural resources should belong to government from mining to energy just for starters as if government operated industries ever ran efficient or were free from corruption. He also supported a single tax for all and believes that, while people should own the value what they produce themselves with everything derived from land should belong to government characterized as belonging equally to all members of society (government).

Joseph Stiglitz criticized Obama publicly saying that the Trans-Pacific Partnership (TTP)  trade deal should not be about “who makes the trade rules—China or the United States?'” Stiglitz said  “I think the big issue is, this is about who makes the rules of trade—the American people, our democratic process, or the corporations? And who they’re made for, which is, for the corporations or for all of us?”

Stiglitz is a core Marxist, which is why he is liked in France where Communism began and convinced Marx this was the way to go. In 2015, Stiglitz wrote two books, The Great Divide and Rewriting the Rules of the American Economy, which are based upon select years for research to support his idea rather than all history. Each book highlights a series of problems he maintains have led to the current state of economic inequality with the gap between the rich and the poor. Stiglitz merely maintains that taking from the rich in greater proportion is necessary to even the playing field and this somehow will make everything better ignoring the fact that as government grows, it consumes the wealth of a nation rather than raises the standard of living. He thus blames everything on a faulty tax code that rewards the rich and hampers the poor, an increase in behavior that boosts the economic gains of only a few while extracting more capital from the majority, and a misplaced focus on altering the economy in a way that benefits shareholders, executives, and investors, but not the average worker.

Macron publicly wanted to be photographed with Stiglitz who is a popular socialist in France. In total, he collected around €15 million, all from private individuals. 1.7% of the donors gave 45% of the funds. He collected €1.9 million when he was still an economic minister illustrating that he saw the collapse in popularity of Hollande, and decides to repackage the same old agenda pretending it was now centrist.

Even Stiglitz believes the Euro is a failure and should be split into a “flexible” euro creating separate groups within Europe, which by default would also be the end of the European Central Bank.