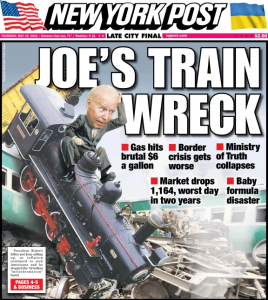 President Joe Biden’s approval rating is at its lowest level – 29%. A majority of Americans, 58%, flat out disapprove of Biden’s work. Unsurprisingly, only 2% of Republicans approve of Joe, with 97% stating disapproval. Only 19% of Independent voters approve, while 68% do not. Democrats are still trying to justify their vote as 64% still support Joe, despite everything he has done to harm the nation.

The only states that saw a slight majority in their approval rating were former President Obama’s home state of Hawaii (45% approval v 41% disapproval) and Vermont (43% approval v 39% disapproval). He fell out of favor with all other states. Anyone living in the US likely hears disgruntled sentiments on a daily basis. I hear angry mumbles from people every time I visit the pump or walk in the grocery store. Countless people in various professions have written in to state how Biden’s policies have directly hurt their businesses.

These low approval numbers make it less likely to see a 2024 Joe Biden election year, as the Democrats now know they cannot win with him at the helm. We saw Boris Johnson resign by force, but will Joe Biden be next? Even the Fed stated that unemployment must rise for inflation to decline. The situation will become much worse before it gets better. In the meantime, low poll Joe has run out of people to blame for America’s downfall.

« The DOJ Wants Illegal Immigrants to Vote
Another Dead Politician »