Kamala Harris Fails to Explain Who Will Pay Off Student Debt 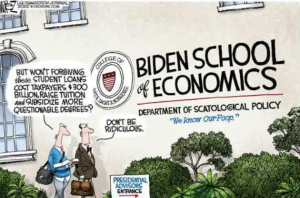 I reported that the taxpayers would be footing the bill for student loan cancellation. A study by Penn Wharton School estimated that taxpayers would each need to pay $2,000 for Biden’s pre-election bribe. The White House has not been able to articulate who will pay for the latest handout, but they want you to think that the borrowed money will simply vanish from thin air. Vice President Kamala Harris is also, per usual, clueless about the situation.

Government must forgive the debt, which means that it will come down to the taxpayers. Harris attempted to clarify her answer but only made the situation more uncertain. “So when we look at who is benefiting from this, 90% of the people who are going to benefit from student loan forgiveness make under $75,000 a year. And that debt has been the reason that they’re unable to start a family, buy a home and pursue their piece of the American dream.”

Clearly, the American dream died for other reasons. Kamala Harris and the Biden Administration are completely out of touch with reality. The youth are unable to start a family or buy a home due to record inflation and a failing system. The government has over $31 trillion in debt but continues to spend recklessly on policies that do not benefit the majority. This plan to forgive student debt is intended as a bribe for votes before the mid-term elections. This will only increase inflation and cause the American dream to be further out of reach to the masses.

« Does the US Want War with China?
CBO Confirms Inflation Reduction Act Will Target Everyone »