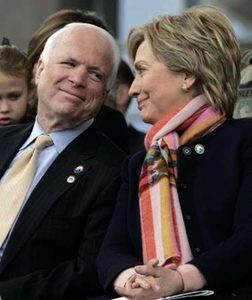 COMMENT: Marty, your sources were correct when you said John McCain had conspired against Trump and was trying to help Hillary. The Inspector General Report confirms what you said long before McCain died.

Truly amazing the contacts you have!

REPLY: The Inspector General’s report on the FBI’s investigation into Donald Trump’s 2016 campaign also proved John McCain was feeding info to Comey to stop Trump. McCain provided the FBI the Christopher Steele dossier which was funded by Hillary. It was that report which McCain received from Hillary that was then used before the Foreign Intelligence Surveillance Act (FISA) court by the FBI to obtain the wiretap on former Donald Trump campaign official Carter Page. This was even AFTER the Department of Justice found no probable cause for the wiretap.

The Inspector General’s report has confirmed indeed that Senator John McCain provided the cover for Hillary since it was a Republican who handed FBI Director James Comey the Steele report even after the FBI had terminated the former British intelligence officer as a source. Russian-born lobbyist Rinat Akhmetshin worked closely with the research firm Fusion GPS which commissioned the infamous Steele Dossier on behalf of the Clinton campaign and DNC to smear Trump and begin the entire Russia-Gate affair. Interestingly, Akhmetshin also attended the infamous Trump Tower meeting.

John McCain was also the sponsor of the Magnitsky Act, which was to punish Russians for claiming that Magnitsky was killed in a Russian prison. But it was the Clintons who gave the wink and nod for the bankers to try to take over Russia by blackmailing Yeltsin for the 2000 election. McCain led the charge among Republicans to support Schumer’s resolution to deny any investigation into the Magnitsky affair. The Senate vote was a resounding 98-0 to deny the questioning of ANY Americans by Russia.

It was McCain who was leading the attack on Russia for sanctions and trying to stop the pipeline into Europe. McCain was also setting up his own version of the Clinton Foundation.

Let us not forget that the hackers who broke into John McCain’s laptop were operating from Ukraine. The hacking that the Democrats have blamed Russia for was operating in Ukraine, not Russia. That was retaliation for the Democrats installing their people after the coup and told the people if they overthrew this government, then they would be on their own. The motive to hack the Democrats had nothing to do with Russia. It was all in Ukraine.