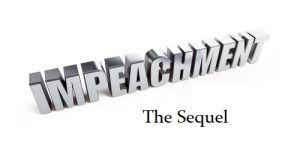 The likelihood of Trump being removed from office by the Senate is zero. However, the Democrats may be preparing to impeach Trump twice. While this current impeachment is unconstitutional and focused on this nonsense with Ukraine, Congress is pursuing in the courts the strategy to compel White House counsel Don McGahn to testify, who defied a subpoena from the House Judiciary Committee. His testimony regarded Robert S. Mueller III’s investigation into the Russia scandal implying an obstruction of justice.

Trump argued that there’s no longer any need for the courts to rush in to decide whether McGahn has to testify to the Judiciary Committee since he was impeached. However, the lawyers representing the Democrats argued that if this testimony produces a charge of obstruction of justice, then the committee could impeach Trump a second time. Keep in mind that Nixon fought the subpoenas and eventually lost in the Supreme Court.

This entire impeachment process has become just another political weapon. It was never intended to be used in this manner and indeed Trump has been only the third president to be impeached. Nixon resigned before the House voted for impeachment based upon bipartisan support for impeachment which has not taken place this time as both parties simply clash.

A second impeachment is possible and would be pursued by the Democrats. This will be taken much more seriously than the current nonsense over Ukraine. For that reason, the turning point of the ECM come January 18th, could be much more important to the market reactions than currently suspected.

This may provide the true answer as to why Pelosi has been holding back on sending the Articles of Impeachment to the Senate. She may actually be holding back to add to the impeachment depending upon the court ruling,

« The Democrats’ Impeachment is Unconstitutional
Was Nadler & Pelosi Paid Off Because Trump is Trying to Pullout of Middle East? »