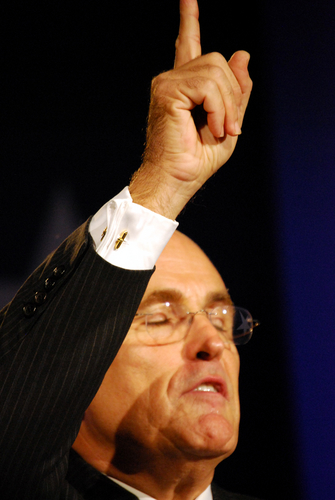 Most of the people I have spoken to in the legal community are shocked that Comey did not indict Hillary. Comey clearly manipulated statutes by pretending that intent was required and claiming he could not prove intent, even though that is regularly enough to hand any jury to demand a conviction. The rest of us are treated far differently. In a fraud case, they put on lifestyle issues to prove intent. They show how much you spent and then play on the jury’s perception of the rich to say, “See! You must have had intent to support your lifestyle.” That is all they need to do to show intent to a jury.

Rudy Giuliani, the famous prosecutor who took down Michael Milkin and John Gotti and later became NYC mayor, came out and said “it’s mind boggling” what Comey did while appearing on Fox Business Network’s “Mornings with Maria.” Giuliani when further saying that Comey manipulated statutes covering the handling of national security information. “The director of the FBI made a really wrong decision, completely incorrect, and gave people a completely wrong impression of how you prove intent. And then ignored the two statutes that don’t require intent and gave no explanation of why there would be no indictment on those statutes.”

Not only would no other government employee be treated in such a manner, but certainly no private citizen. We have 65 million Americans who have been charged with something, which is about 25% of the entire adult population. They have been treated ruthlessly with no such mercy for the smallest offense. There was an ex-Vietnam vet, who had a prior charge, who wore an empty shell on a necklace with the chain drilled through the casing to remind him of Vietnam. They prosecuted him and gave him five years in prison for a felony possession of ammunition, claiming he could repair the shell and then reload it. Where was such intent there?

This is all part of the collapse in government. The rule of law no longer means anything. The judges are more likely to be corrupt and rule only for the government. The hope of getting a fair trial is gone. The game is simply over and Comey has just proved that to the entire world. When the rule of law collapses, the viability of government comes to an end. Between police murdering people with no just cause to Hillary betraying the country to line her pockets through the pretend foundation that the Clintons started when they were broke, nothing decent remains to leave our children. This is simply going from bad to worse.