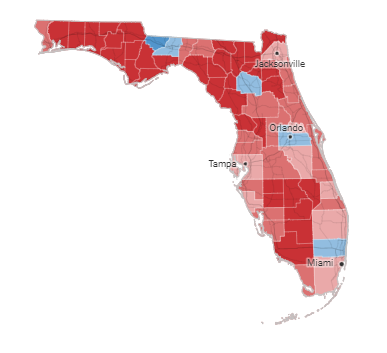 DeSantis’ victory was really in the bag. However, the migration fleeing Wokeness outside Florida has changed the political map entirely. Miami Dade County has NEVER voted Republican in history. It voted for DeSantis. I moved to Florida 6 years ago. I did so when Socrates pinpointed that Florida would be the #1 state in the USA. My family was not so pleased, but I said I had to follow Socrates. The traffic here has doubled, which was not something I Cherish. Hedge Funds have been moving to Florida as well as the hidden secret – much of Wall Street moved to Florida.

This vote for DeSantis is remarkable in how the map has changed – not simply that he won by about 60%. I am glad I put my faith in Socrates. We have a diverse climate for those who think Florida is hot. The North gets cold in winter and it has even had snow on occasion. But by Tampa, you will still need a jacket in winter, and on some occasions, I have even had to turn the heat on.

This vote is historic for flipping Miami, but it is also important from the perspective of the flight from the Woke states. I have met people who fled up north because during COVID their children became so depressed and boys with dreams of sports careers even became suicidal. Others moved for freedom and the whole COVID scam destroyed people’s lives, small businesses, and careers. People who fled to Florida did so for a variety of reasons. Yet what I found astonishing was that Florida became the beacon of light around the world.

Those who would assume I would support DeSantis for President are wrong. They will eat him for lunch in DC. He is far more in control right here.