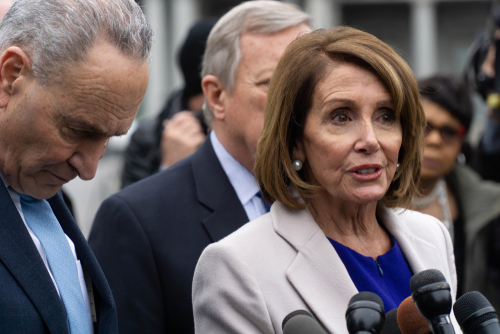 Nancy Pelosi claims that Biden’s victory gives the Democrats a “MANDATE” to alter the economy as they see fit with just 50.5% of the popular if that. This proves that Biden will NOT represent everyone – only the left! I have warned that this has been their agenda from day one. Now, three whistleblowers from the Democratic software company Dominion Voting Systems, have alleged that the company’s software stole 38 million votes from Trump. There are people claiming that Dominion Voting Systems is linked to Soros, Diane Finestein, Clintons, and Pelosi’s husband. I cannot verify any of these allegations so far.

We are standing on the banks of the Rubicon. Civil War is on the other side. There should NEVER be this type of drastic change to the economy from Capitalism to Marxism on 50.5% of the popular vote. NOBODY should be able to restructure the government and the economy on less than 2/3rds of the majority. That would be a mandate. Trying to change everything with a claim of 50.5% of the popular vote will only signal, like the Dread Scot decision, that there is no solution by rule of law. This is the end of civilization and it will turn ugly from here because there is no middle ground anymore. As I have warned, historically the left will never tolerate opposition. These people are pure evil. They do not believe in freedom, but to subjugate all opponents. There is no individual freedom on the left, only the whole (state) is more important than the one (individual).

« The Corruption in the Election – Are We About to Cross the Rubicon
Is there a Way Out? »