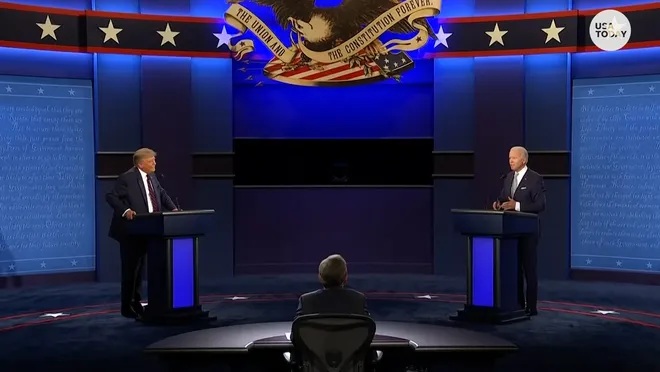 QUESTION #1: Who do you think won the debate?

COMMENT #1: Agreed. Our President had an opportunity to reach out to the nation and win over fence sitters, but I feel he failed miserably. He seemed more intent on pissing off the competition. I find it sad.

ANSWER: I think it was a disaster and reflects what our computer has warned about – the nation is seriously divided. I think Trump thinks he showed he was a fighter, but it was more like a food fight in high school with a lot of yelling.

I think Biden was coached and his refusal to have anyone look in his ear to see if he was getting coached during the debate was a serious mistake. He had a shot at showing he was competent and blew it. When Trump brought up his son, Biden dodged the issue and talked about his other son in the war. He simply refused to answer the millions of dollars his son got when he did not have a job before he became VP but did go off an say he was proud of Hunter for kicking his drug problem. Nobody has ever bashed him on that issue. You have to wonder where that came from.

I understand Trump could not come out and say COVID is a scam. The press will trash him all over for that. But he was way too hostile and did not show that he could reach out to the independents. Biden had him rattled whereas I think the earpiece coached Biden pretty good and he kept addressing the audience directly looking at the camera which was an effective debating tactic.

I think the expectations were so low for Biden that he came off better. Not sure it will change the minds of those on either side because, as I said, we really vote for parties not individuals anymore. All the left media will naturally proclaim a victory for Biden and fact-checking has become fact-twisting. When Biden said nobody would have died if Trump did his job, then that means every other country head of state also failed?  The countries in which lockdowns prevented herd immunity and they have second waves whereas places like Sweden do not have such sharp rises. Here in Florida, it really has been no big deal, we were not locked down. Trump just was too rattled and lost his cool.

« The Debate
Welcome to the next 2 years of Sheer Madness »