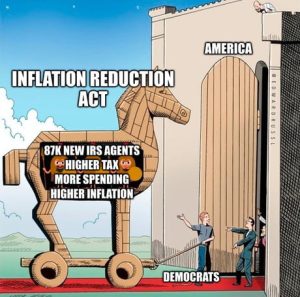 The Congressional Budget Office (CBO) conducted a study that proves claims that the middle class will not face tax increases under the Inflation Reduction Act are unfounded. This comes after the CBO said that the act would have little if no impact on inflation. Treasury Secretary Janet Yellen urged the IRS not to target the “share of small business or households below the $400,000 threshold that are audited relative to historical levels.” She knew that was not possible.

The truth of the matter is that everyone will be targeted. The CBO estimates that those earning under $400,000 annually will contribute to $4 billion in collected revenue over the next decade. That is nearly the size of a care package embezzlement to Ukraine. The CBO stated:

The billionaires they claim to be targeted have teams of lawyers and accountants, as do large corporations. The average person or small business owner does not have the option of eclectic accounting or hiring a team to take on the IRS. I have no idea why people still think the Democrats are the party of the working and middle class when their policies do nothing but harm the average American.