Can Trump Postpone the Election? Maybe He Can! 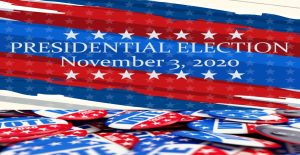 Trump tweeted about postponing the election due to the mail-in voting without proving who you are. There is a lot of fake news running around claiming that the 20th Amendment to the Constitution says the term must end by January 20th. However, this does not specify which January.

Then there are many claiming that the 22nd Amendment defines the term of the president as four years. This Amendment only limits the president to two terms and has nothing to do with the length of a term of office.

“The electors shall meet in their respective states, and vote by ballot for two persons, of whom one at least shall not be an inhabitant of the same state with themselves. And they shall make a list of all the persons voted for, and of the number of votes for each; which list they shall sign and certify, and transmit sealed to the seat of the government of the United States, directed to the President of the Senate. The President of the Senate shall, in the presence of the Senate and House of Representatives, open all the certificates, and the votes shall then be counted. The person having the greatest number of votes shall be the President, if such number be a majority of the whole number of electors appointed; and if there be more than one who have such majority, and have an equal number of votes, then the House of Representatives shall immediately choose by ballot one of them for President; and if no person have a majority, then from the five highest on the list the said House shall in like manner choose the President. But in choosing the President, the votes shall be taken by States, the representation from each state having one vote; A quorum for this purpose shall consist of a member or members from two thirds of the states, and a majority of all the states shall be necessary to a choice. In every case, after the choice of the President, the person having the greatest number of votes of the electors shall be the Vice President. But if there should remain two or more who have equal votes, the Senate shall choose from them by ballot the Vice President.” (see also 3 USC §12)

All of this does not address what happens in an emergency. Former President Harry Truman seized steel production under the argument of national security during the Koren War. He explained: “Our national security and our chances for peace depend on our defense production. Our defense production depends on steel.” He claimed, “inherent power” to do what needed to be he had done. The Supreme Court rejected that argument saying that: “The Founders of this Nation entrusted the lawmaking power to the Congress alone in both good and bad times. It would do no good to recall the historical events, the fears of power, and the hopes for freedom that lay behind their choice.” Justice Robert Jackson wrote:

They knew what emergencies were, knew the pressures they engender for authoritative action, knew, too, how they afford a ready pretext for usurpation. We may also suspect that they suspected that emergency powers would tend to kindle emergencies. Aside from suspension of the privilege of the writ of habeas corpus in time of rebellion or invasion, when the public safety may require it, they made no express provision for exercise of extraordinary authority because of a crisis. I do not think we rightfully may so amend their work.

However, here the enemy of the state is actually Congress. There is no question that the COVID numbers have been so abused because the hospitals are paid even for people without insurance as long as they claim they have COVID. Even the director of the CDC Robert Redfield admitted that before Congress. The numbers are inflated because they are not paid unless it is COVID.

This has been defined under National Security. What is fascinating is that this conspiracy to seize the government from Trump has manufactured an actual National Security Crisis using this exaggerated COVID Pandemic which did not exist under Truman. Here, there are shortages of money because of social-distancing and shutting down the economy so people have not been spending cash, and even the Post Office is disrupted. In trying to mail books, delays were unbelievable.  Congress changed its rules and have allowed its member to attend remotely. That in itself may not be constitutional. Congress has allowed lawmakers to cast votes for as many as 10 other House members by proxy. This is certainly a highly dangerous new rule.

Article I, Section 4 clearly requires that: “The Congress shall assemble at least once in every year, and such meeting shall be on the first Monday in December, unless they shall by law appoint a different day.” There is no Constitutional Authority for proxy votes. Each representative was to represent 30,000 people – not a party. Additionally, elections for the Senate and House of Representatives were: “The times, places and manner of holding elections for Senators and Representatives, shall be prescribed in each state by the legislature thereof; but the Congress may at any time by law make or alter such regulations, except as to the places of choosing Senators.” 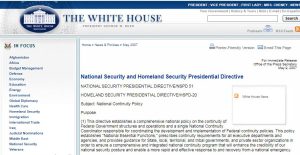 The COIVID contrived crisis is such an emergency is defined as “any incident, regardless of location, that results in extraordinary levels of mass casualties, damage, or disruption severely affecting the U.S. population, infrastructure, environment, economy, or government functions.”

The Directive states its purpose:

“This directive establishes a comprehensive national policy on the continuity of Federal Government structures and operations and a single National Continuity Coordinator responsible for coordinating the development and implementation of Federal continuity policies. This policy establishes “National Essential Functions,” prescribes continuity requirements for all executive departments and agencies, and provides guidance for State, local, territorial, and tribal governments, and private sector organizations in order to ensure a comprehensive and integrated national continuity program that will enhance the credibility of our national security posture and enable a more rapid and effective response to and recovery from a national emergency.”

This presidential directive defines the “national essential functions” of the federal government, specifies “continuity requirements” for the departments and agencies in the federal government’s executive branch, and “provides guidance for state, local, territorial, and tribal governments, and private sector organizations. It also provides for a National Continuity Coordinator who will oversee the “development and implementation of federal continuity policies.”

Since Congress has made new rules that it will no longer require member to be present due to this COVID Crisis and allows proxy voting not authorized by the Constitution, the very foundation of a representative government has ceased to exist. The purpose of this Directive is to protect the constitution. There is no comity among the branches to preserve the constitutional framework of government to execute constitutional responsibilities and provide for orderly succession, an appropriate transition of leadership, and interoperability and support of the National Essential Functions during a catastrophic emergency.

This Directive 51 asserts that the president has the power to declare a catastrophic emergency. It does not specify who has the power to declare the emergency over. It also authorizes the new position of “National Continuity Coordinator” would be filled by the assistant to the president for Homeland Security and Counterterrorism. The directive further specifies that a “Continuity Policy Coordination Committee“, is to be chaired by a senior director of the Homeland Security Council who is selected by the National Continuity Coordinator. The majority of this order is secret and has not been published. The mere fact that Congress has stopped attendance and allowed proxy voting does not comply with the constitution and calls into question is this COVID Crisis has indeed risen to a catastrophic emergency thanks to the media.

It certainly appears that this is ripe for the Supreme Court. What if there was an act of war and Congress was destroyed in an attack? How would the government function is Congress does not attend? The primary mission of the Homeland Security Act was to prevent terrorist attacks within the United States, reduce the vulnerability of the United States to terrorism, and minimize damage and assist in recovery for terrorist attacks that occur in the United States. If it argued that COVID was deliberately released by any clandestine group to bring down the US economy in order to create a Great Reset opportunity, then clearly Homeland Security comes into place and the Justice Department is duty-bound to investigate if anyone in Congress or any agency, including Fauci, have conspired with anyone to create this national catastrophic emergency and cause the national GDP to collapse in the greatest recorded decline in history.

There is the authority to postpone the elections when Congress itself is no longer attending. This will end up in the Supreme Court, but there should be a nonpartisan investigation of everyone involved and ASAP to be able to reveal evidence to justify this catastrophic emergency which has been fueled by CNN, Washington Post, and New York Times just to mention a few.

3 USC §12. Failure of certificates of electors to reach President of the Senate or Archivist of the United States; demand on State for certificate

When no certificate of vote and list mentioned in sections 9 and 11 of this title from any State shall have been received by the President of the Senate or by the Archivist of the United States by the fourth Wednesday in December, after the meeting of the electors shall have been held, the President of the Senate or, if he be absent from the seat of government, the Archivist of the United States shall request, by the most expeditious method available, the secretary of state of the State to send up the certificate and list lodged with him by the electors of such State; and it shall be his duty upon receipt of such request immediately to transmit same by registered mail to the President of the Senate at the seat of government.

1984-Pub. L. 98–497 substituted “Archivist of the United States” for “Administrator of General Services” in section catchline and two places in text.

1951-Act Oct. 31, 1951, substituted “Administrator of General Services” for “Secretary of State” in section catchline and two places in text.