Call Biden to the Impeachment Trial 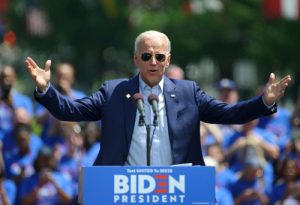 If I were Trump, I would use the Senate impeachment trial to call Joe Biden and enforce the subpoena in the Supreme Court since the trial must be conducted by the Chief Justice of the Supreme Court. I would call Biden to account for how his son, who had no experience in energy, warranted a $50,000 per year job on the board of an energy company in Ukraine that just happened to be under investigation for corruption.

Let’s use the impeachment to expose the reality of politicians getting indirect benefits for their families, which is something we would go to jail for in the regulated financial industry. The laws that apply to the private sector NEVER apply to politicians. Had the FBI made that inquiry of Ukraine to investigate Biden, as they did with Trump, there would be no question that would warrant any charge against the FBI.

Sorry, but the hypocrisy in bringing impeachment charges against Trump for the very thing that Joe Biden publicly admitted is just so outrageous that it demonstrates that they assume the American people are too STUPID to figure anything out.

Trump would have the RIGHT to call Biden to demonstrate that he was not trying to influence an election since Biden is not yet the candidate, but sought to discover if there was any truth behind the appearance of corruption in the Biden family.

« Hillary For President 2020
John McCain Conspired Against Trump With Hillary »