California Begs Residents Not to Move to Texas 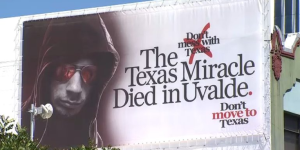 California’s failed policies have led residents to flock to states like Florida, Arizona, and Texas. Now, California is begging them to stay by using disturbing rhetoric. Billboards are appearing across Los Angeles and San Francisco warning against moving to Texas. The reason? The horrific Uvalde School massacre that occurred at Robb Elementary in May.

“The Texas miracle died in Uvalde,” the billboards states. It is in bad taste to use a school shooting to promote an agenda. The gunman was apprehended by a Texas resident with a gun. The police failed those children. None of this has anything to do with California’s policies; crime is not as prominent in Texas.

Between 2020 and 2021, over 25,000 fled California to Texas, according to the US Census data. Overall, over 360,000 people left California in 2021. Most cite that California has become completely unaffordable, with the median home price at about $797,470. Companies have fled California since the beginning of the pandemic to tax-friendly states. They lost huge job creators and revenue makers such as Facebook, Twitter, Dropbox, SpaceX, and Tesla, to name a few. Another less discussed reason is the intense woke rhetoric spewed by Newsom and others. Theft has basically become legal. Despite the beautiful scenery and weather, people simply do not want to live in the Golden State for a plethora of reasons.

« Two Charged for Revealing Ashley Biden’s Diary
Does the US Want War with China? »