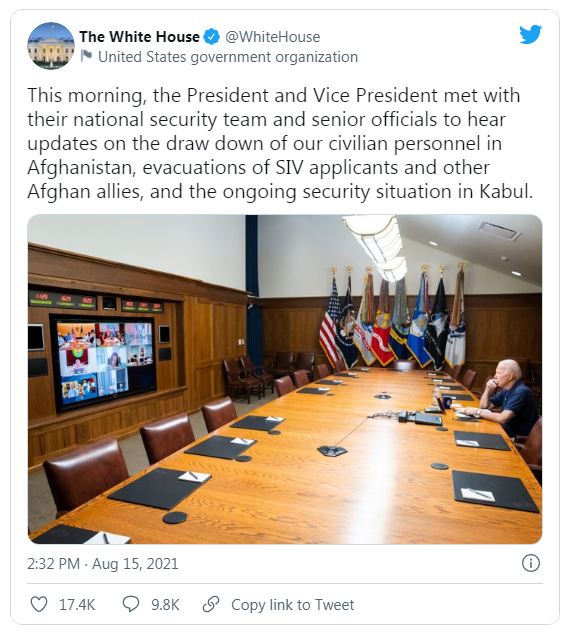 The White House released this photo of Biden’s national security meeting concerning Afghanistan. Anyone who has been forced to work virtually knows one thing — it sucks! A trading room was vibrant because when people work together in a common office, you get far more done than individually. The financial markets would NEVER have developed if they were all virtual. The bidding and offering in a market were always different. You need to catch also the subtle differences in expression that are impossible virtually and even more impossible behind a mask. Someone can say, “What have you been up to?” and it can be in the form of a cordial greeting or an interrogation with respect to what have you produced. Behind a mask, you cannot see if there is a smile or a frown.

In all fairness, as the Taliban were closing in on Kabul, Biden sent a confirmation of US abandonment which was designed to absolve himself of all responsibility, shifting the blame to Trump. That signaled to the Taliban you won — the country is yours. Biden said that Trump “left the Taliban in the strongest position militarily since 2001 and imposed a May 1, 2021 deadline on US forces.”

This will go down in history as the most disgusting announcement perhaps in American history by any Commander in Chief, which was in truth an American retreat.