Biden Controversy in the Wind 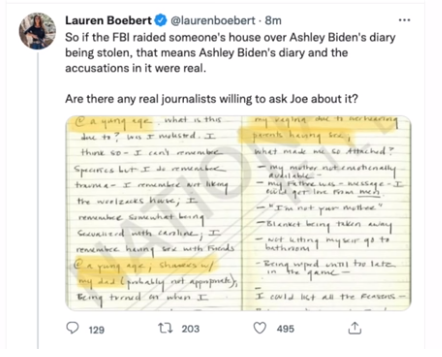 For some time, there has been suggested that pages from Ashley Biden implying that Joe Biden molested his own daughter had been floating around. Project Veritas was approached with it but Ashel’s lawyer would neither confirm nor deny that the diary was real. So nobody was willing to go there without confirmation that she had actually written this diary. Then the FBI has raided Project Veritas people in search of this diary that was allegedly stolen. This would make it seem that the allegations are possibly true so Joe was more than sniffing little girls’ hair, which is strange enough. Congresswoman Lauren Boebert had the cuts to post the excerpt on Twitter posing this very question. If the diary is fake, there there is no basis for the FBI to be raiding people’s houses in search of the diary.

Biden is collapsing in the polls and his approval is down to 38%. If this turns out to be true, I can’t imagine anything more likely to lead to sheer political chaos in 2022.

« Why Biden Does not Care About his Polls
The Collapse of the USA & the Rule of Law? »