An Environmental Economist to Take the Head of the IMF 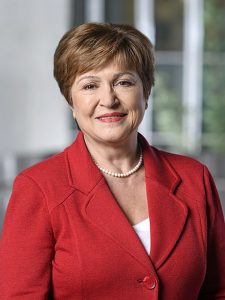 QUESTION: Mr. Armstrong; You had once written that Christine Lagarde was only a lawyer and she was really put in the role of the IMF chief by Obama. What do you have to comment on this new Bulgarian selection? Do you know her?

ANSWER: Kristalina Georgieva will probably take over the International Monetary Fund (IMF). At least this Bulgarian is an economist, and she has banking experience whereas Christine LaGarde did not. Georgieva is currently chief executive of the World Bank. I do not know her personally, although we probably shook hands yet nothing more.

Georgieva was considered back in 2016 for the post of the UN Secretary General, but was passed over for the Portuguese António Guterres. For the IMF, Georgieva was the candidate of France and of some Eastern European states. Germany and others were backing the former Dutch Finance Minister Jeroen Dijsselbloem. This time the French won.

If we look at Georgieva background, she does hold a doctorate in economics and research at the London School of Economics and at the Massachusetts Institute of Technology (MIT). From 1993 to 2010 she worked at the World Bank. She headed the Environmental Department of Washington Bank and, in the meantime, her representative office in Moscow. In 2010 she moved to Brussels becoming a Commissioner as Europe’s top development aid worker.

When Jean-Claude Juncker took over the Presidency of the Commission in 2014, he made Georgieva Vice-President in charge of the budget. Georgieva had been involved in a major restructuring at the World Bank turning it greener. We should keep in mind that Georgieva wrote her doctoral thesis on “Environmental Policy and Economic Growth in the US.”

« Ukraine & 911
Epstein His Connection to “The Club” of Manipulators »