This is big news. Alberta’s new Premier Danielle Smith is the first government leader to apologize for vaccine mandates. Taking it a step further, she directly criticizes the World Economic Forum (WEF) and Schwab; she has “no interest in being involved with them.” During her first day in office, Smith immediately apologized for the vaccine mandates. She is offering to rehire any government worker who lost their job due to their vaccine status.

“We are not QR codes,” Smith once said, adding that she wants to “purge” Canada’s QR database. She called out Alberta Health Services (AHS) for creating problems by colluding with the WEF. “They signed some kind of partnership with the World Economic Forum right in the middle of the pandemic; we’ve gotta [sic] address that. Why in the world do we have anything to do with the World Economic Forum? That’s got to end,” Smith said. Great question, Danielle. 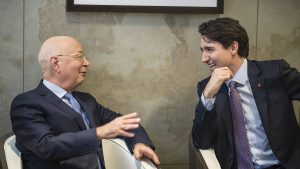 She plans to look into amnesty for outstanding COVID-related fines. “The system, my friends, is broken,” she said. “Most of those managing AHS today are holdovers from the NDP years. They have had their chance to fix this bloated system and they have largely failed on almost all accounts. Failure is no longer an option.”

Remember when Schwab boasted about infiltrating world governments with various Young Global Leaders, such as Trudeau? She publicly said that it is “distasteful” and “offensive” when billionaires brag about how much control they have over governments. Yes, this is a direct shot at Schwab. She is the first government leader to openly question why we have allowed the WEF to infiltrate governments and control policies. We need more leaders like Danielle Smith who are willing to acknowledge the growing power that Schwab and his minions have in shaping the global society. Better yet, we should question why they were handed power in the first place.