Florida Ports are Open for Business 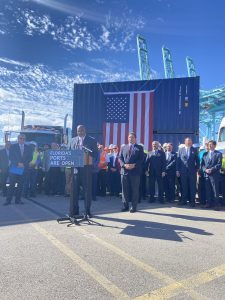 Florida’s Governor Ron DeSantis proudly announced: “Florida ports are open for business!” The Jacksonville Port Authority (“Jaxport”) is on board and has received a record number of containers at 1.4 million this fiscal year alone. Jaxport CEO Eric Green said that Florida is not experiencing the same congestion back up issues as California and New York ports. Additionally, Green said Jaxport has the space for additional freights and is welcoming ships to reroute to the Sunshine State.

While the Biden Administration begged the two largest ports in California to begin 24/7 operations, Jaxport has been running 24/7 for some time. “Not only is Florida open for more business, Florida has the critical infrastructure, essential manpower and additional capacity for more business,” AGX Freight Chief Operation Officer Ike Sherlock commented. Although some may point to logistical concerns and fuel costs, ships that are idling for nearly two weeks are losing money on both in addition to labor costs.

This could be a viable option to repair supply chain constraints. The only reason for the Biden Administration to avoid focusing on Florida’s ports capacity would be political.

« Are the US Supply Chain Disruptions Deliberate?
Meat Prices on the Rise »