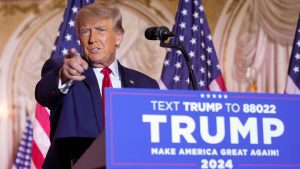 Donald Trump announced that he is officially running for the 2024 Republican presidential nomination. The only president in American history to win re-election after a defeat was Grover Cleveland in 1892. The establishment repeatedly tried to impeach Trump to prevent him from seeking a second term, but he’s back.

Trump wanted to keep America out of war. He threatened to leave NATO and pushed other countries to contribute their fair share. It is safe to say that Trump would likely not be sending billions to Ukraine under his America first policy that branded him as selfish. We talk about energy fears crippling the world, but America was the top producer of oil and natural gas under his presidency.

At this point, no one can honestly say they are better off under Biden. When I attended an event at Mar-a-Lago, I was very impressed by Trump. It was the first time in my entire career that I heard a head of state concerned about the soldiers they sent off to war. He said we needed to face the fact that foreign governments have been fighting over borders in the Middle East for ages, and it was not our place to intervene. He said he never wanted to call another mother and tell her that their child had died in a pointless battle.

He was not afraid to speak to our enemies and even became the first US president to cross the border into North Korea. Our current president can barely speak in general and has put America last. A vote for Trump was a vote against the establishment. Politicians cried that he had no experience in politics, but that is precisely why he won in 2016 — because he is not you.

The establishment will continue its efforts to take down Trump by any means. He has too many supporters for that to be an easy feat, and he’s prepared to enter political guerilla warfare. In all honesty, by the time we reach 2024, there may not even be a presidential election. We must crash and burn.