If bull markets are defined by currency flows, how do you explain the fact that the Chinese stock market has over doubled in 12 months?

I have learned over the years that if someone does not want to listen, you cannot convince them of anything, for their mind is already made up and will never change.

Nothing would move without capital flows domestically or internationally. The movement of absolutely EVERYTHING is driven by human nature running into something (boom) or fleeing (bust). Capital flows are by no means confined to just international movement. Internally, capital MUST concentrate where everybody runs to invest in something be it dot-com, gold, real estate, stocks, bonds, etc. It does NOT matter what the instrument is. There will always be a boom and bust, and those who blame dark forces are fools, for there is nothing that is ever exempt from the boom and bust cycle.

International capital flows made the global economy expand post WWII. As governments hunt down capital everywhere, they are destroying the world economy at a staggering rate. By the time they figure out what they have done, it will be too late. You cannot repair the damage in 30 days or less. Everything we constructed since WWII will be destroyed by this trend in government to consume every scrap of loose change to maintain the Marxist/Keynesian theory, that they should and can create perpetual economic growth without the cycle. 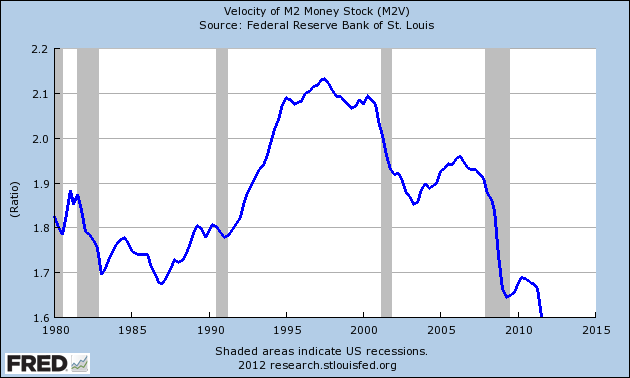 We can see from the Fed’s chart tracking VELOCITY that it looks like the collapse of the 1929 Depression thanks to hunting money and FATCA. This has wiped out liquidity, so when the markets turn down, there will be a lot more flash crashes to blame on someone other than government. We are complacent in allowing our politicians with ZERO experience run an economy and be in charge of our entire future way of life. In that respect, we deserve what we will get in return for our collective stupidity. To get a job they want some degree. We elect lawyers to run an economy. That is like going to a massage therapist for brain surgery. SORRY – they are not qualified. Just look at the game of chicken the EU is playing with Greece. They will destroy Greece and the EU with this stupidity.

I have stated countless times that it is the CONCENTRATION of capital into one sector that causes the boom. Each 8.6-year wave is a different flavor. One time it will be commodities, then stocks, followed by bonds and real estate, and then the shift from sectors domestically will change.

So if you only want to cling to your fixed beliefs, then why bother reading anything. You will only look for news that supports your biased view and will never learn from your experience, for you will cling to your theories like a passenger on the deck of a sinking ship. This is the very complacency that has allowed government to run wild.