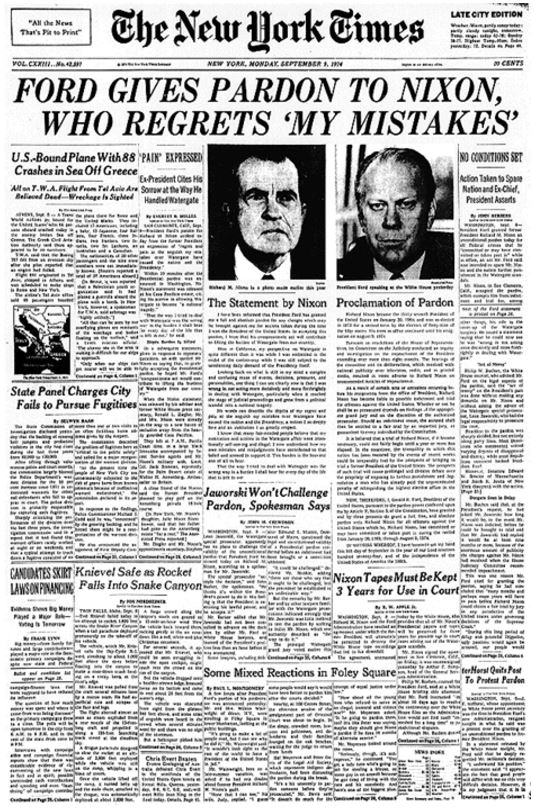 President Ford granted former President Richard M. Nixon an unconditional pardon for all Federal crimes that he “committed or may have committed or taken part in” while in office. Ford said his pardon was intended to spare Mr. Nixon and the nation further punishment in the Watergate scandals. This establishes the precedent and answers the question whether Obama will or even could pardon Hillary. If he words this pardon in the same manner, Hillary can escape tax evasion, treason, whatever.

The more interesting problem, as I have stated before, I see her crime more as TREASON and it does not center on her emails, but the Clinton Foundation. That means in my judgment, that the exposure extends to Bill and Chelsea as well. Indeed, anyone working at the Clinton Foundation engaging in pay-for-play taking money from foreign governments could be charged with TREASON. If anything emerged that linked Obama to future kick-backs, then and only then would there be a Constitutional Crisis concerning the question can Obama pardon someone for a crime in which he participated?

I would have to say that the dark cloud over the Clinton Foundation, which has been a money laundering operation, will be reason for Obama to pardon Hillary on his last day. Keep in mind that Obama can ONLY pardon Hillary for Federal crimes. Therefore, the State of New York could prosecute Hillary on a host of issues if they had the guts. The very purpose of a pardon is stated in the Department of Justice rules:

In addition, you should bear in mind that a presidential pardon is ordinarily a sign of forgiveness and is granted in recognition of the applicant’s acceptance of responsibility for the crime and established good conduct for a significant period of time after conviction or release from confinement. A pardon is not a sign of vindication and does not connote or establish innocence. For that reason, when considering the merits of a pardon petition, pardon officials take into account the petitioner’s acceptance of responsibility, remorse, and atonement for the offense.

In this case, there is no conviction. Obama has refused to say whether he is considering a pardon for Hillary according to White House spokesman Josh Earnest. Nixon had to accept the pardon and still acknowledge that acceptance. Ford eventually agreed, and on September 8, 1974, he granted Nixon a “full, free, and absolute pardon”, which ended any possibility of an indictment. Nixon then released a statement:

I was wrong in not acting more decisively and more forthrightly in dealing with Watergate, particularly when it reached the stage of judicial proceedings and grew from a political scandal into a national tragedy. No words can describe the depth of my regret and pain at the anguish my mistakes over Watergate have caused the nation and the presidency, a nation I so deeply love, and an institution I so greatly respect.

Consequently, precedent still dictates that Hillary would have to admit guilt and remorse as did Richard Nixon. That may be even harder for her to do than wearing purple. It would end her political career and influence. However, given her tenacity, she would choose her words very carefully and the marginalize whatever she admits as forced by Trump. This still would leave Bill and Chelsea exposed, so would Obama then pardon both of them as well? That would clearly concede that the crime is pay-for-play and not the emails.