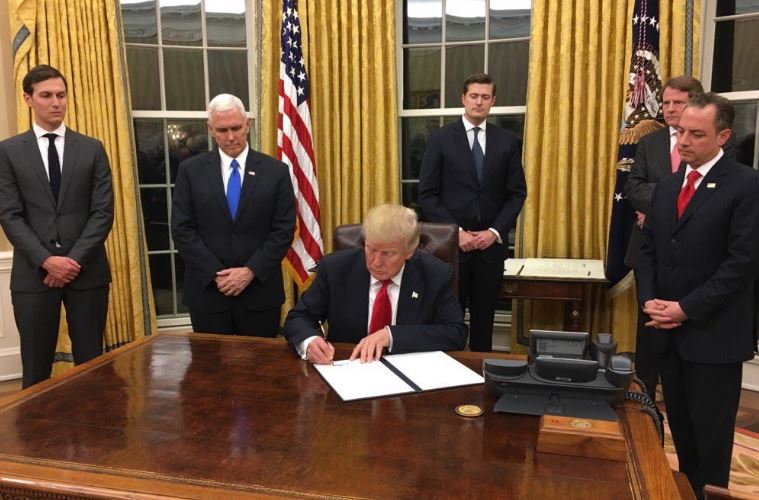 About 75% of everything Obama did was by Executive Order bypassing Congress. That means that the next president can easily undo 75% of what Obama did by Executive Order.  On Monday, Trump signed an executive order formally withdrawing the United States from the 12-nation Trans-Pacific Partnership trade deal keeping his promise from his campaign last year. Trump called the TPP order a “great thing for the American worker.” That executive action sends profound signals to the Democrats and world leaders in foreign capitals around the entire world that Trump’s “rhetoric” concerning trade during the campaign is turning into real action. Normally, whatever candidates have said during the election process rarely takes place. Trump is proving to be not just the outsider, but the non-politician putting meat on those bones many have called the “Trump Revolution”.

The TPP was negotiated under former President Barack Obama, but never ratified by Congress. TPP was the largest regional trade accord in history, which would have set new terms for trade and business investment among the United States and 12 other Pacific Rim nations. Therefore, withdrawing from TPP will not have any immediate impact other than signal a new and very different US outlook on trade under Trump. The TPP agreement was a hallmark of the Obama administration, which became a focal point during the campaign, where it was opposed by the nominees of both major parties. The TPP became a symbol of failed globalism and the loss of United States jobs overseas that Hillary never really embraced the American worker position. Democratic Senator Bernie Sanders told the BBC he support Trump’s action because trade deals like this have been a “disaster” and cost millions of jobs.

Additionally, Trump then also signed an order imposing a federal hiring freeze. Of course the Federal labor leaders blasted Trump for freezing government hiring claiming lines will suddenly get longer. This was a campaign promise they criticized during the election and Trump made good on his promise. Contracting out work is much more efficient than hiring federal employees with pension costs. Naturally, the federal labor unions complain because they want the dues.

Trump also issued an Executive Order banning U.S. non-governmental organizations receive federal funding from providing abortions abroad known as the Mexico Policy. The Mexico City Policy was originally announced by President Reagan in 1984 and required nongovernmental organizations to agree as a condition of receiving any federal funding that they “would neither perform nor actively promote abortion as a method of family planning in other nations.” Then-President Bill Clinton rescinded it in January 1993 upon taking office funding abortion, and George W. Bush reinstated it when he took office. Then Barack Obama rescinded it again in 2009 and Trump has reinstated it once again. This has been a political football for decades.

Also on Monday evening, Mr Trump’s pick to be secretary of state, Rex Tillerson, was approved by the Senate Foreign Relations committee, and now requires confirmation from the full Senate. The new head of the CIA will be Mike Pompeo, following a Senate vote of 67 to 30, in his favor.

Meanwhile, Trump has said he will cut taxes massively and 75% of regulation that simply reduces economic growth and curtails jobs.