Meanwhile, Hillary lost not merely because she misread the “real” people, she decided to run a very divisive and nasty negative campaign, which has fueled the violence ever since. According to WikiLeaks emails from campaign John Podesta, Clinton colluded with the DNC and the media to raise what they thought would be the extreme right among Republicans to then make her the middle of the road to hide her agenda. 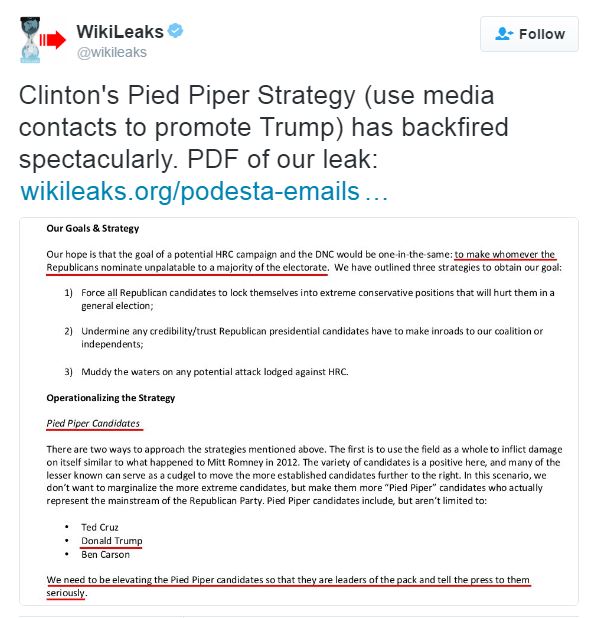 Clinton called this her “pied piper” strategy, that intentionally cultivated extreme right-wing presidential candidates and that would turn the Republicans away from their more moderate candidates. This enlisted mainstream media who then focused to Trump and raise him above all others assuming that would help Hillary for who would vote for Trump. This was a deliberate strategy all designed to propel Hillary to the White House.

The Clinton campaign and Democratic National Committee along with mainstream media all called for using far-right candidates “as a cudgel to move the more established candidates further to the right.” Clinton’s camp insisted that Trump should be “elevated” to “leaders of the pack” and media outlets should be told to “take them seriously.”

If we look back on April 23, 2015, just two weeks after Hillary Clinton officially declared her presidential campaign, her staff sent out a message on straregy to manipulate the Republicans into selecting the worse candidate. They included this attachment a “memo for the DNC discussion.”

The memo was addressed to the Democratic National Committee and stated bluntly, “the strategy and goals a potential Hillary Clinton presidential campaign would have regarding the 2016 Republican presidential field.” Here we find that the real conspiracy was Clinton manipulating the Republicans. “Clearly most of what is contained in this memo is work the DNC is already doing. This exercise is intended to put those ideas to paper.”

“Our hope is that the goal of a potential HRC campaign and the DNC would be one-in-the-same: to make whomever the Republicans nominate unpalatable to a majority of the electorate.”

The Clinton strategy was all about manipulating the Republicans to nominate the worst candidate Clinton called for forcing “all Republican candidates to lock themselves into extreme conservative positions that will hurt them in a general election.”

It was not Putin trying to rig the elections, it was Hillary. Clinton saw the Republican field as crowded and she viewed as “positive” for her. “Many of the lesser known can serve as a cudgel to move the more established candidates further to the right.” Clinton then took the strategic position saying “we don’t want to marginalize the more extreme candidates, but make them more ‘Pied Piper’ candidates who actually represent the mainstream of the Republican Party.”

Her manipulative strategy was to have the press build up Donald Trump, Sen. Ted Cruz and Ben Carson. “We need to be elevating the Pied Piper candidates so that they are leaders of the pack and tell the press to them seriously.”

This conspiracy has emerged from the Podesta emails. It was Clinton conspiring with mainstream media to elevate Trump and then tear him down. We have to now look at all the media who endorsed Hillary as simply corrupt. Simultaneously, Hillary said that Bernie had to be ground down to the pulp. Further leaked emails showed how the Democratic National Committee sabotaged Sanders’ presidential campaign. It was Hillary manipulating the entire media for her personal gain. She obviously did not want a fair election because she was too corrupt.

What is very clear putting all the emails together, the rise of Donald Trump was orchestrated by Hillary herself conspiring with mainstream media, and then they sought to burn him to the ground. Their strategy backfired and now this is why she has not come out to to speak against the violence she has manipulated and inspired.

This is by far the WORST campaign in history and it was all orchestrated by Hillary to be intentionally divisive for the nation all to win the presidency at all costs. She has torched the constitution and the country. No wonder Hillary could not go to the stage to thank her supporters. She never counted on them and saw the people as fools. The entire strategy was to take the White House with a manipulation of the entire election process. Just unbelievable. Any Democrat who is not angry at this is clearly just a biased fool. Wake up and smell the roses. You just got what you deserve.