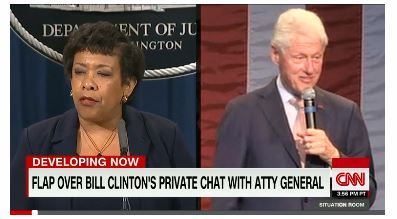 Attorney General Loretta Lynch met privately with Bill Clinton on the tarmac in Phoenix. The claim is he just happened to see her plane and hopped on board to speak only about his grandchildren. In “The Forecaster,” Oliver Brown appeared who had been in charge of the law library in the New York prison. I was told I could not speak to him, visit him, say thank you, or anything because I could be accused of bribing him to appear in the movie. This is standard legal advice. It made me feel wrong that I could not even say hello, but that is the real world. Here we have two lawyers who know the rules. Clinton met with the Attorney General while she is supposed to be investigating his wife. To now claim they only spoke about his grandchildren is an insult and total bullshit. This is something any lawyer would tell you that you CANNOT do.

The Attorney General has now been compromised. She should RESIGN. Sorry, but this is the real world. I could not even say hello to Oliver Brown; I still have not spoken to him, seen how he is doing, or been able to say thank you. Bill Clinton knew what he was doing and Lynch knew as well. Enough is enough. They simply assumed they could get away with it on a tarmac. She was in the plane already. That means he went out of his way to jump on the plane. This was not giving a smile and walking past someone he knew, as a lawyer, he could not speak to legally. We already know Lynch will NEVER indict Hillary. It would be political suicide for her career and Obama has no doubt already told her to lay off. It does not take this long to investigate and Hillary would not be running if there was any possibility of being charged. That means the whole Democratic machine has assurances from the White House that Hillary will never be prosecuted. Bill just had to make sure since this is the woman who can stop him from becoming the first male First Lady.

« Hillary: The Most Devious Politician of All Time?
FBI To Clear Clinton by Democratic Convention »