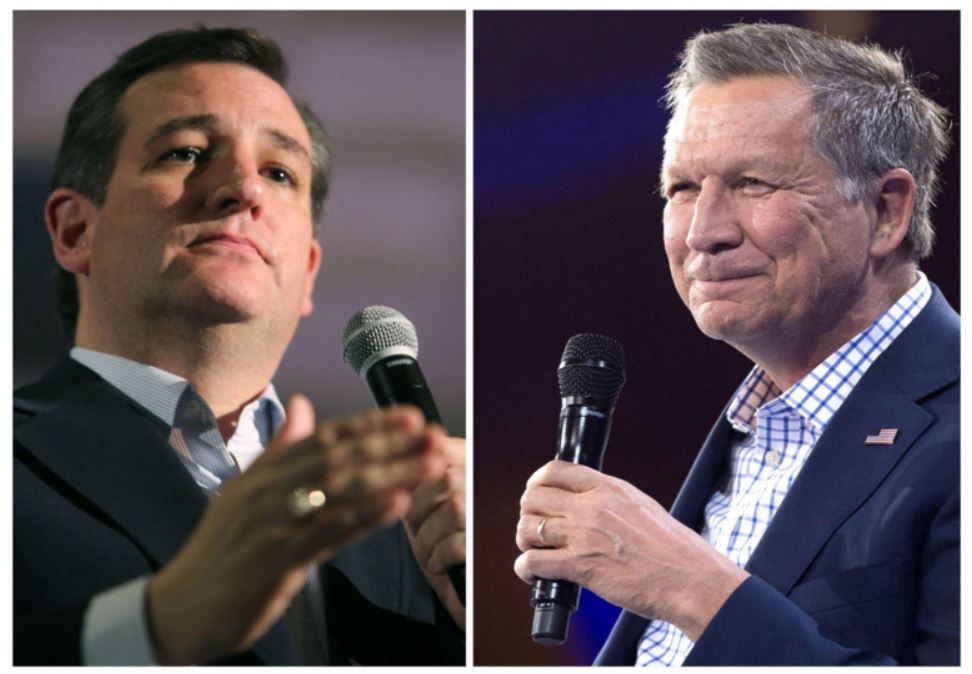 Ted Cruz and John Kasich have actually conspired to commit a federal crime by denying the American people the right to vote. They announced that they will each step aside in one or more states to try to block Trump from achieving the nomination. Kasich is trying to defeat the democratic process because the establishment hates Cruz intensely and Trump to a lesser degree. Cruz and Kasich are now conspiring to steal delegates after a first ballot; nullifying the entire right to vote in the primaries, which is a federal crime. They are effectively saying that the Democratic process is unfair because the people are electing someone who the establishment does not approve of, or in other words — not them. Neither one of these politicians has a legitimate delegate base to seek the nomination. Their solution is to nullify the people’s choice and cheat them at the convention, committing voter fraud.

Let’s make this clear. They will justify themselves by writing a rule and claiming their actions are legal. There is a small problem they do not address — the Supremacy Clause in the Constitution. The Supremacy Clause of the United States Constitution (Article VI, Clause 2) establishes that under the Constitution, federal laws made pursuant to it, and treaties made under its authority, constitute the supreme law of the land. No rule passed by the delegates for the convention can supersede the constitution. Relying on any rule to circumvent the right to vote is a federal crime. They can write a rule and behead the loser as in some Mayan sports game, but that does not make it constitutional.

The Supreme Court has long ago recognized that the “right to vote” for federal offices is among the rights secured by Article I, Sections 2 and 4, of the Constitution, which is protected by Title 18 Section 241. United States v. Classic, 313 U.S. 299 (1941); Ex parte Yarborough, 110 U.S. 651 (1884). This statute was enacted following the Civil War and was intended to address efforts to deprive the newly emancipated slaves of the basic rights of citizenship, such as the right to vote. Therefore, we cannot find any other law whose purpose is to further criminalize exactly what Cruz and Kasich plan to do.

The civil rights statute, 18 U.S.C. § 241, has been interpreted to include any effort to derogate any right that flows from the Constitution or from federal law. Section 241 has been an important statutory tool in election crime prosecutions. It was used to break up the South’s intent to deprive blacks of their civil rights. Initially, this statute only applied to schemes intended to corrupt elections for federal office, which is exactly on point with the statements of Cruz and Kasich.

If two or more persons conspire to injure, oppress, threaten, or intimidate any person in any State, Territory, Commonwealth, Possession, or District in the free exercise or enjoyment of any right or privilege secured to him by the Constitution or laws of the United States, or because of his having so exercised the same; or

If two or more persons go in disguise on the highway, or on the premises of another, with intent to prevent or hinder his free exercise or enjoyment of any right or privilege so secured –

This statue 18 U.S.C. § 241 has recently been applied successfully to non-federal elections as well when that state action was a necessary feature of the fraud. This state action requirement can be met not only by the participation of poll officials and notaries public, but by activities of persons who clothe themselves with the appearance of state authority, e.g., with uniforms, credentials, and badges. Williams v. United States, 341 U.S. 97 (1951).

Cruz and Kasich have openly stated that they are conspiring together to rig the election and defraud the majority of the people out of their right to vote for Trump. The Republicans can make rules that the delegates are not bound after the first ballot, but that has never been reviewed by the Supreme Court. Once you create a “right to vote” in the primary, to nullify that “right to vote” would logically violate 18 U.S.C. § 241.

On one side, we have Hillary who clearly should be criminally prosecuted, but won’t because the Democrats control the prosecution process. On the other side, we have the two remaining Republican candidates, who stand no chance whatsoever of winning, conspiring together to deprive the people of the “right to vote”, which is also a felony. You have to admit, this is the craziest election since Andrew Jackson.