We are looking at the complete collapse in the rule of law. There is no other way to put this. The Department of Justice is so compromised with Lynch at the head it is getting to be absurd. Peter J. Kadzik is the Assistant Attorney General for Legislative Affairs at the Department of Justice (DOJ). Clearly, there is an internal war going on as I reported. Now that the FBI has over the 650,000 emails uncovered in Anthony Weiner’s notebook, which Huma Abedin failed to turnover to Congress claiming she had no idea how they got there. The US Justice Department announced it is now also joining the probe to dedicate all necessary resources to quickly clear Hillary, up pops the conflict of interest. In the letter to Congress, the DOJ person to aid this investigation to clear Hillary by the election, is Assistant Attorney General Peter J. Kadzik who wrote to the House and Senate lawmakers. 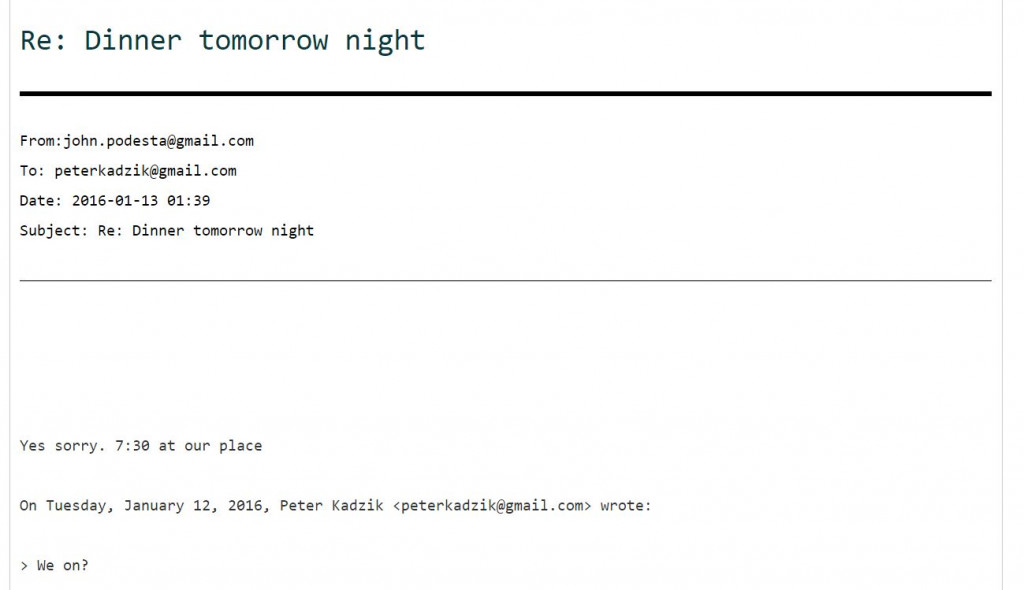 This is Podesta’s friend for dinner who goes to his house. Plus, Peter Kadzik donated $250 to Hillary also noted in Podesta’s spreadsheet. Kadzik and Podesta were classmates at Georgetown Law School back in the 1970s and have been good friends ever since. In fact, Kadzik represented Podesta during the Monica Lewinsky investigation and Podesta wrote that Kadzik was a “fantastic lawyer” who “kept me out of jail.” It was also Kadzik who lobbied Podesta for Marc Rich to obtain a pardon for a fugitive when you have to show remorse to get a pardon. Never has a Pardon been granted to a fugitive in this manner. Then Kadzik’s wife, Amy Weiss of Weiss Public Affairs, worked on the 1992 Clinton/Gore Campaign as a Press Secretary. She was the Communications Director for the Democratic National Committee, and on top of that, she was White House Deputy Assistant to the President Bill Clinton. It gets better. Another email sent on May 5, 2015, Kadzik’s son asked Podesta for a job on the Clinton campaign. This is the independent person appointed by Lynch to clear Hillary? Come on! This is outright in your face corruption.

Why would the DOJ pick such a conflicted person? The answer is obvious. They want to CLEAR Hillary no matter what. Kadzik is there to now counteract anything Comey does because there is really an internal war waging in Washington. The screams from behind the curtain are getting deafening. It is so disgusting that we are witnessing the complete collapse of anything pretended to be the rule of law. The status quo, including George Bush Sr, are all backing Hillary so there is NOTHING that will change and they all live fat and happy off of our taxes and legal oppression. This is really becoming a battle to save the country from the privileged establishment. They milk us like cows and send our boys into battle with lies and propaganda to enrich themselves. I lost half my school friends to Vietnam when Lyndon Johnson even said in 1965 the Vietnamese never attacked us; “For all I know, our navy was shooting at whales out there.” (source)

Perhaps a vote for Trump is the slap in the face these corrupt people need. What a complete mess we are in.