Is Bill Clinton Losing It? 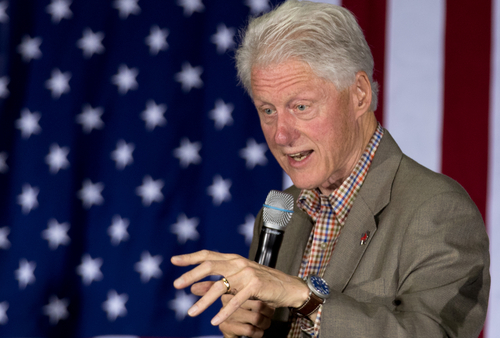 The whole meeting between Lynch and Bill Clinton calls into question the judgment of both people. Lynch should have declined the meeting and Bill should never have asked to meet her. Why? Sources from Hollywood say Bill is losing it. He is not as sharp as he used to be and he may be on medication, which does not help. Clearly, nobody seems to believe this meeting was to talk about his grandchildren. He was late and held up his flight to meet with her. She should have declined. This was a stupid meeting for they will not indict Hillary, and now it will clearly give rise to a conspiracy since others have been indicted for less.

The unlikely event of an indictment would mean Hillary would have to step aside. So there is no possible way the investigation can continue, and the Democratic Party has way too much invested in this not to have assurances that there would be no indictment. Then Obama has begun to campaign for Hillary, proving there is no indictment to come. The meeting is a disaster and Lynch should resign just to clear the air for this will remain as part of the ongoing conspiracy with no end.

Let me make one thing very clear. The conduct of the Clintons has been outrageous over the years. As soon as they won the White House, Hillary fired the White House travel staff and gave it all to a personal friend. That became Travelgate in May 1993. There has always been just a question of friends and deals that have gone hand-in-hand. But make no mistake, the Clintons are not unique, they just have done more than most. This is all about career politicians, which is why Paul Ryan and Mitt Romey continue to publicly work against Trump. They would rather have Hillary in place so Washington remains the same — the playground to get rich for career politicians of both parties.