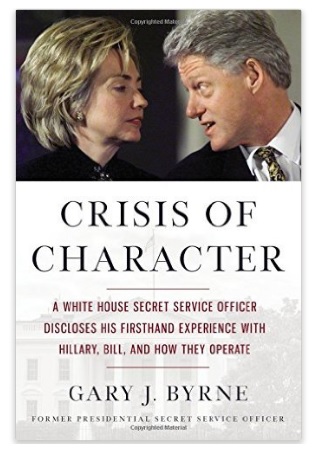 More people are writing books about the Clintons to expose their corruption than any other president or presidential candidate in history. While Bill has dominated if not set a record for sexual scandals, it has been Hillary who dominates all the financial scandals. That really says something for a first lady – no first lady in history ever was the top of corruption like this. Gary Byrne, a former Secret Service agent whose post was directly outside President Clinton’s Oval Office, will reveal what he observed inside the White House while protecting the First Family in a new book entitled “Crisis of Character.” With a second Clinton administration threatening the country — Byrne has come out to say no more.

The Clinton’s scheme has been corrupt from the very beginning. Byrne reports that while serving as a Secret Service officer, he saw Bill’s and Hillary’s political and personal schemes unfold. In his book, “Crisis of Character,” Byrne provides a firsthand account of the scandals — known and unknown — and daily trials ranging from minor to national in scale. He tells of the political dysfunction of the Clinton White House that was obsessed with destroying their enemies in a very vindictive manner. Unsurprisingly, Byrne says that governing was an only afterthought to the Clintons.

« The Accountability Act
Politicians Are Still in Denial »