The Elite & Their Undemocratic Superdelegates/Electoral College 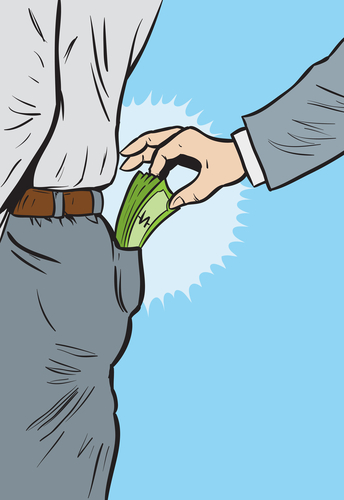 The audacity of Mitt Romney to come out and bash Trump, yet not endorse anyone else, was a blatant play to be drafted by the Republican elites whom are looking to rob the people of any Democratic process. Romney is deeply entrenched within the elite. In July 2012, Cheney used his Wyoming home to host a private fundraiser for Romney, which netted over $4 million in contributions from attendees. If Romney were to be president, Cheney would be hiding in the shadows.

Politicians are becoming the same worldwide. In Europe, the Troika never stands for election, yet they rule over the people with an iron fist with one hand, and the other hand is used to pick the pockets of the great unwashed. They regard the vote of the people as routine and easily manipulated. A Republican questionnaire that was sent out didn’t ask what the most important issues were, it only asked the social bombshells. There is nothing addressing the economics.

Then there is the dark pool of “superdelegates” who are not involved in the Republican Party nomination process and are thus a check against any democratic system. These superdelegates in the Republican National Convention are actually seated automatically, but they are limited to three per state, and in theory compose more than 10% of the required number to be elected as the candidate at the national convention. These superdelegates consist of the state chairperson and two district-level committee members. Republican Party superdelegates are therefore obliged to vote for their state’s popular vote winner under the rules of the party branch to which they belong, but this rule can be changed.

The “superdelegate” actually began in the Democratic National Convention. They were the means for the elite to control the convention. Distinguished from other delegates, the superdelegates were seated automatically and could choose to vote for whoever they wanted to vote for. Democratic superdelegates are free to support any candidate for the nomination. This contrasts with the delegates “pledge” to vote for who won the popular vote. This entire process is very anti-democratic and is designed for the elite to control the election.

Then there is the Electoral College process, which the Founding Fathers established in the Constitution as a compromise between the election of the president by a vote in Congress and the election of the president by a popular vote of qualified citizens. The Electoral College process, therefore, consists of 538 electors. A majority of 270 electoral votes is required to elect the president. Your state’s entitled allotment of electors equals the number of members in its Congressional delegation: one for each member in the House of Representatives plus two for your Senators. There is ample opportunity for the elites to try to steal the election from the people. The question becomes, what will erupt in the aftermath if they play for such high stakes?

When we look at the delegates amassed so far, Trump is well ahead, but look at Jeb Bush. He was lower than Carson. Bush was the elite choice, as he was the traditional pick based upon his last name. I have told the story before of how I used to visit people who wanted to run for president. They were told I was there to advise them on the world economy, yet I was there to also vet them and relay my opinion if they had what it took to do the job. I was asked in 1999 to fly to Texas to meet with George Bush Jr. I was told this was “different” and they admittedly told me he was “stupid.” They never used such demeaning words before. I asked why they would choose someone stupid to be president. I was told he had the “name” that would carry the day. I was then asked if I would accept the position of chief economic adviser. I laughed and said there was no possible way. They said they had to surround Bush Jr. with good people. Hence, Dick Cheney really ran everything. Bush actually disliked Cheney and came to distrust him immensely. Bush and Cheney were never quite friends and they never socialized outside of the office. In that respect, one must feel sorry for Bush. He truly got the raw end of the deal. Nevertheless, the elite saw Jeb with the name, but this time that name made a cycle inversion thanks to Cheney.

The elite actually think they can somehow rob the people of any right to vote. It is the same attitude emerging in Brussels. They think the people are too stupid to know what is best for them.