A Review of “Hillary’s America” 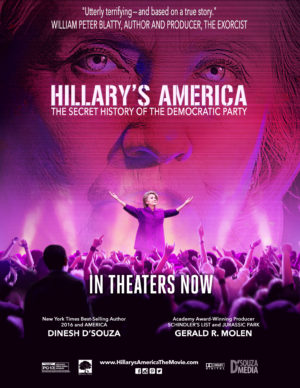 I went to go see “Hillary’s America.” When I Googled to see where it was playing, there were a bunch of pro-Hillary sites at the top of the page. Nevertheless, about four down, I finally came to the movie. The movie was different than I expected. It went through the history of the Democratic Party, which was amazingly spot-on and not distorted. Indeed, it showed one of the greatest scams of all time. The Democrats pretend to be the party of minorities and the poor, but in fact, they have been the primary oppressors.

Clinton signed the mandatory minimums in drug cases and sent more minorities to prison than any other president in history. The film also discussed the inside story of Johnson (LBJ) who took the credit for the Civil Rights Act, which merely enforced what was passed after the Civil War. It showed that the gun regulation championed by the Democrats outlawed blacks from owning guns. The film showed that Democratic President Woodrow Wilson began segregation.

The primary theme of the movie was the bait-and-switch con orchestrated by the Democrats, who were the slave owners, into using the minority vote to enrich themselves. There was perhaps only 25% of the film dedicated to the Clintons. From a historical perspective, it did a great job of showing the real nature of politics. It did not touch on the Republican corruption, just the transformation of the Democrats from slave owners into the pretend minority defenders.

This really should be mandatory in history class.