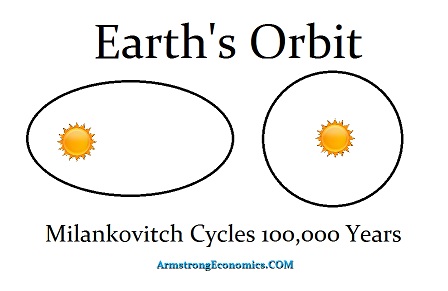 QUESTION: Mr. Armstrong; I just read your report on the Maya discovery of time and the flipping of the poles. Obviously, from the data you put together, it appears we are in that zone where the poles will flip. Do you have anything that would imply what they would mean for civilization today?

ANSWER: We are definitely in that zone where the poles will flip. Nobody really knows what that will do to society. It does perhaps make the climate more irregular creating swings in both directions leading to such a shift. However, one of my real problems with the Global Warming nut-jobs is that they have ignored everything that proves them wrong. They never address the fact that the Earth’s orbit changes over time as well. The very coming and going of the Ice Ages are certainly impacted by cyclical changes in the Earth’s circumnavigation of the Sun. These variations in orbit are composed of a combination of three major cycles that are collectively known as the Milankovitch Cycles for Milutin Milankovitch, the Serbian astronomer who calculated their magnitude. When the Earth travels further from the sun it simply gets very cold here very fast.

Everything in nature is cyclical and as such fractal. Take any two things that have a cycle and you will see that at some point they will align. Take Passover and Easter. This year 2018 was the third time this century, the Jewish celebration of Passover and the Christian holiday Good Friday fall on the same calendar day. The two previously coincided in 2012 and 2015. Since 1900, Easter has fallen on April 1st only four times – 1923, 1934, 1945 and 1956 until this year 2018. It won’t happen again until 2029. Complexity will always enter as soon as you deal with simply two variables.

There is the Earth’s orbital path which has a cycle of 100,000 years, but then there is the cycle of the axial tilt that comes into play every 41,000 years. Now add the Earth’s “wobble” cycle which is a cycle of 25,800 years. These cycles will combine at times to create real havoc. Add to this mix the pole flipping and we just do not know what can happen. The first of the three Milankovitch Cycles is the Earth’s eccentricity. Eccentricity is, simply, the shape of the Earth’s orbit around the Sun. This constantly fluctuating and as such the orbital shape ranges between more and less elliptical (0 to 5% ellipticity) on a cycle of about 100,000 years.

None of this is ever taken into account by the Global Warming people. They pretend that it is only human activity and this is a sad state of affairs for when we add the pulse of the Sun and how it beats like your heart between maximum and minimum energy output on a 300-year cycle, you can imagine how an Ice Age will unfold when the cycle of energy output lines up with the Milankovitch Cycles. I moved to Florida and quite frankly, after this winter, perhaps I did not move far enough south. It’s going to get very cold up north – I warned you!

« Yellowstone – The Supervolcano When is It Due?
British Earthquakes »