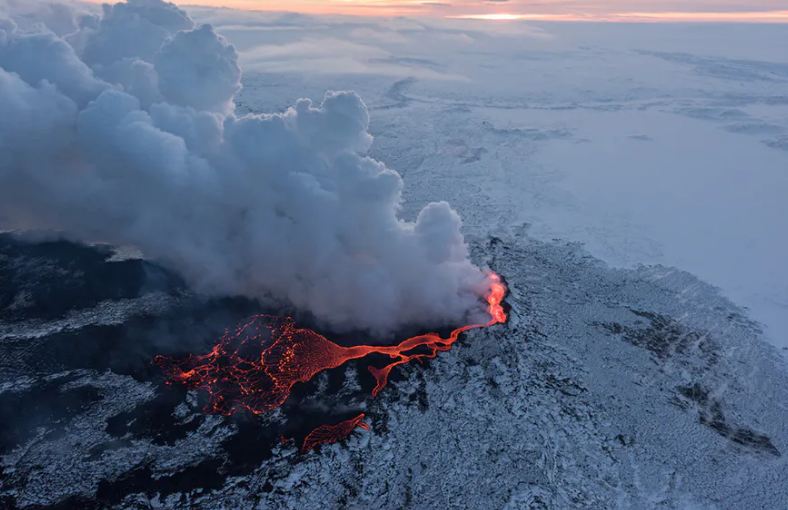 Iceland is known as the Land of Fire & Ice. Volcanic activity is escalating in a region that has not erupted for 800 years. Ever since the turn on the Economic Confidence mode on January 18th, 2020, that very Monday, January 21st, earthquakes began on the Reykjanes peninsula. Reykjavik has experienced more than 8,000 earthquakes and about 10cm of land uplift due to magma intrusions underground which is raising the land itself. This region is waking up with the last eruption about 800 years ago (though there have been more recent eruptions offshore). Geological evidence shows the area is fed by five volcanic systems, which seem to come to life in a coordinated way roughly every 1,000 years.

There are approximately 130 volcanoes in Iceland, active and inactive. However, there are about 30 active volcanic systems that can be found under the island, in all parts of the country except the Westfjords region, which is the oldest part of Iceland’s landmass formed around 16 million years ago. The volcanism of Iceland comes from the fact that the country sits directly across the Mid Atlantic Ridge. This ridge separates the North American and Eurasian tectonic plates, and Iceland is one of the few places on earth that it can be seen above sea-level.

The most recent known eruption in Iceland was at Holuhraun in the Highlands back in 2014. Grímsfjall volcano had a short eruption during 2011 and, more famously, Eyjafjallajökull caused disruption to international air traffic back in 2010. However, there have been many suspected subglacial volcanic eruptions at different locations around the country that did not break the ice, such as Katla in 2017 and Hamerinn in 2011. This makes creating a database for future forecasts difficult.

The most major volcanic eruption of Iceland’s history was the so-called Skaftáreldar (fires of Skaftá) in 1783–1784. In the past eruptions of Eyjafjallajökull have been followed by eruption of the larger volcano Katla in 2017. In the case of the 1783 Skaftáreldar, this type of eruption was characterized by huge outpourings of lava and volcanic gases. These gases convert in the atmosphere to aerosols which can cause regional hemispheric impacts. There were reports across Europe of an atmospheric haze and dry Sulphur type fog in 1783. Meteorological records also show that the summer of 1783 was unusually hot and was followed by an exceptionally cold winter. Contemporary records from England and other European countries also demonstrate there were also health impacts such as outdoor workers suffering respiratory difficulties and crop and vegetation damage.

The largest fissure eruption in historical times in Iceland was the Eldgja eruption in 934-938 AD, which is from the Katla volcanic system which erupted in 2017. More than 18 km of lava was produced and more than 1 km of tephra, as fissures opened up along a total length of 75 km. Some of the fissures opened below ice sheets which may explain the large volume of tephra.

In total, there have been four large volume fissure eruptions in historical times (since late 9th century) with erupted volumes greater than 4 km. So, these eruptions are not frequent and yet we know that the last of these, the Laki eruption, led to severe impacts on Iceland and beyond.

From a rough cyclical model based on incomplete data, we are also witnessing rising volcanic activity into 2025 coming out of Iceland in line with Solar Minimum.