Has the Extinction Cycle Also Turned Against Us? 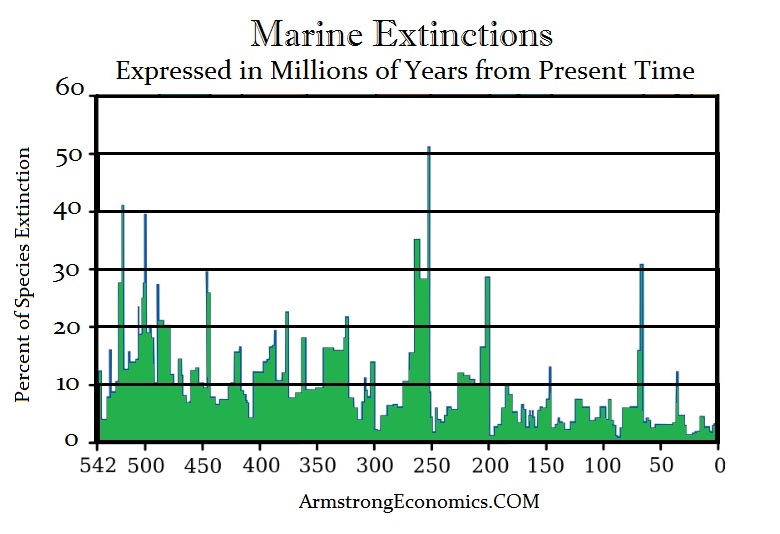 QUESTION: Martin,
I have a question that is well outside your usual realm of discourse, so please bear with me as I explain.
I have just returned from visiting my friend, who is a senior cetacean biologist at one of the large west coast universities. While there, he described an amazing situation to me that has alarmed me greatly. He said that research at his university has conclusively identified the complete or almost complete collapse of several dozen food chains within the Pacific Ocean, all within the last 36 months or so. Further, in “unauthorized” exchanges with the relevant departments in other coast universities, he learned that the numbers involved may well be more like hundreds of chain collapses in the same timeframe as opposed to dozens. Finally, in talking with authoritative figures in Vancouver, they apparently believe that the figure is likely closer to 1000. My friend also explained that equally alarming is the fact that all these research departments are finding within the genres of sea life they have physically examined within the same timeframe “huge numbers of general body mutations, as well as skin disorders” which all cannot yet be accounted for in terms of causation.
As bad as all of this sounds, here is the real rub. Regarding these findings about food chain collapses, mutations, and injuries, my friend’s university has instituted a policy that forbids them from publishing their findings, from discussing their findings (on this subject) publicly or in private with other researchers outside their own campus, or finally from taking “unauthorized” radiation readings as part of their research. The penalties for violating these new rules are severe: loss of tenure, civil lawsuits for violation of contract, and potentially employment termination. He showed me a memo on the subject from her own university, so there is no doubt about that in my mind. For the part about colleagues at other universities encountering the same things, I have nothing but my his word but that is good enough for me.

I have never viewed myself as an alarmist or a conspiracist, and I know that he is neither of those things; he is someone who has always been dedicated to the scientific method and to facts. However, despite the preposterous look of this thing I must say that I feel something is badly wrong here. In doing some quick research on all of this, I have indeed found quite a number of articles from mainline sources talking about massive food chain collapses in the Pacific, but not quite on the scale my friend’s colleagues have suggested, and nowhere is any of this said to be possibly connected to radiation from Japan.
Martin, I have read your writings for some five years now, and at least as far as the subjects I believe I am qualified to render judgment on, I have never known you to be wrong about anything. This is much more than I can say about any press outlets or pundits. As a result, I feel compelled to put the question on this matter to you. Do you have any information derived from correlated computer data, or from your personal contacts that can shed any meaningful light on the situation described?
As always, please know that all your work and public disclosures are a boon to us all, and are deeply appreciated.

ANSWER: I have been keenly aware of this crisis and have been running studies on it to test where this impacts the timeline. The greatest Marine extinction is known as the Permian–Triassic period. Evidence exists for environmental change around boundary suggests that there was an 8 °C (14 °F) rise in temperature, and an increase in CO2 levels by 2000 ppm. This is also one major factor that demonstrates the Global Warming people are not only dishonest since the CO2  concentration just before the industrial revolution was 280 ppm compared to present is 400 ppm. We are talking here about serious volcanic activity to have pushed the CO2 levels to 2000 for that extinction. However, there is also evidence of increased ultraviolet radiation reaching the earth, causing the mutation of plant spores at that time.

There are some who believe the mutations and dead was set in motion by the nuclear disaster in Japan. The data I have run demonstrates that we are headed toward another spike in the extinction cycle. This is entirely normal cyclical activity. We have entered 26 million years from the last historic low. This is when we should see a large spike. I am certainly willing to input data into our systems to see what emerges if anyone has more detailed near-term data that can possibly be extrapolated to see if there are cycles within cycles. If we could hone this series down to target at least decades, that would be great. So far, we have been able to make crude projections that may place the worst of this between 2032 and 2072.

Obviously, man may be aggravating the cycle increasing the amplitude, but there is no evidence that this cycle is set in motion by humankind. This appears to be a natural cycle at this point. The sardine biomass, which is the primary prey for so many marine species, has also collapsed to its lowest level in six decades. There are normal ocean regions that are naturally low in oxygen. However, these regions have been growing exponentially. They have expanded both horizontally and vertically. This has now incorporated rather extensive portions of the eastern Pacific, almost all of the Bay of Bengal, and an area of the Atlantic off West Africa as broad as the USA. These low oxygen areas have expanded by more than 1.7 million square miles in the past 50 years.

We may be dealing with Murphy’s Law – whatever can go wrong, is going wrong.