Japan’s Monetary System is a Warning to Modern Society 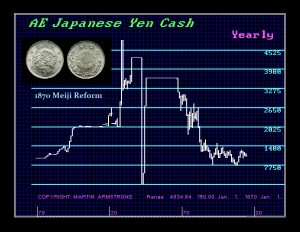 QUESTION: Mr. Armstrong; My friend who retired from the Bank of Japan told me you had recreated the monetary system of Japan and that was how you could predict the yen would go below par back in 1995 and again in 2011. Could you please publish the chart on the yen showing the full monetary system from the Meiji reform? 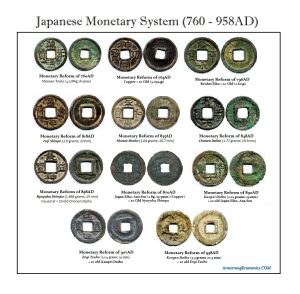 ANSWER: Japan has been through a truly wild ride when it comes to currency. The emperors would devalue the outstanding money supply when they came to the throne and reduce it to 10% of its former value. This allowed the new emperor to issue coins as if he were beginning anew. By the time the third emperor pulled this stunt, the people simply refused to accept the coins of the emperor ever again.

The Japanese resorted to using bags of rice as money and Chinese coins. Eventually, they also used ingots of silver or gold for larger transactions by the 18th to 19th century.

This is actually a very good reference point because Japan lost the ability to issue money for 600 years until the Meiji reform in 1870 when the yen was born. The last official Japanese coin issue was in 958 AD. 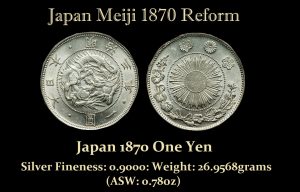 The Meiji Reform of 1870 set the yen at par with the US dollar based upon a silver yen which was the equivalent of the US silver dollar.

This is an important point because as governments today try to eliminate their currency in the hunt for taxes, people are hoarding US dollars exactly as the Japanese began to hoard Chinese coins. Governments should look well at what they are proposing for they can lose the confidence of the people and they will lose the right to issue money. They only way to prevent hoarding requires a universal abandonment of all currencies and their replacement with a single electronic one-world currency. But that system will fail like the Euro for a single currency imports and exports the inflation or deflation from the core economy. Not all nations are on the same side of the business cycle.