Trump Stands Down on Retaliation Against Iran 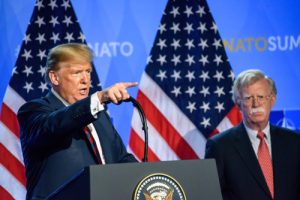 Trump said Iran’s attack on the drone was probably an unintentional “mistake.”

According to sources, President Trump had approved military strikes against Iran targeting its radar and missile batteries in retaliation for the attack on the American surveillance drone, but he scratched the mission after the planes were in the air. The White House and Pentagon declined to comment on why the mission was scrubbed, but the rumor is the question of escalating the conflict and drawing in Russia at this moment in time. Meanwhile, according to Iran’s Tasnim news agency, the Commander of the Aerospace Force of the IRGC, Amir Ali Hajizadeh, made a statement that they gave a 10 minute warning to pull back the drone at 3:55 a.m. local time on Thursday before the drone was shot down at 4:05 a.m. Iran’s claims to have wreckage of the Drone does fly in the fact of U.S. claims that it was in international airspace.

The Deep State appears to prefer war. John Bolton, national security adviser, has publicly and repeatedly been calling for regime change in Tehran. Nevertheless, Trump has actually maintained a cool head and has declined to say what he will do in response to the incident on Thursday. Trump realizes he was elected to end the policy of wars, not begin them. Bolton keeps arguing to go to war against Iran. It is easy for such people to play with the lives of others. If I were Trump, I would argue to go only if you went along with the troops. Trump said Iran’s attack on the drone was probably an unintentional “mistake.” It is Bolton who is the real problem and I would fire him in the blink of an eye.

Meanwhile, private airlines are now diverting flights such as British Airways away from the Strait of Hormuz given the tensions and the concern that Iran could mistakenly shoot down a commercial flight.