Schwab Advocates Putting Chips in Our Head so Government Can Read our Thoughts?

Klaus Schwab wants to create this Agenda 2030 which is primarily based around dismantling the current capitalist system in favor of greater centralized authoritarian rule which will lead to lower living standards, less fuel consumption, fewer civil liberties, and much more government control tracking everything we do with a restriction on travel.

“What the fourth industrial revolution will lead to is a fusion of our physical, digital and biological identity.” 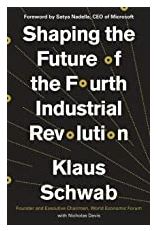 In Schwab’s book, “Shaping the Future of The Fourth Industrial Revolution”,  he explains that the developing technology will allow authorities to “intrude into the hitherto private space of our minds, reading our thoughts and influencing our behavior.”

Schwab appears to have watched the movie Minority Report for he seems to have been influenced by that whereby the government can prevent crimes by reading your mind.

“As capabilities in this area improve, the temptation for law enforcement agencies and courts to use techniques to determine the likelihood of criminal activity, assess guilt or even possibly retrieve memories directly from people’s brains will increase. …Even crossing a national border might one day involve a detailed brain scan to assess an individual’s security risk.”

“Fourth Industrial Revolution technologies will not stop at becoming part of the physical world around us—they will become part of us.”

“Indeed, some of us already feel that our smartphones have become an extension of ourselves. Today’s external devices—from wearable computers to virtual reality headsets—will almost certainly become implantable in our bodies and brains.”

If you talk about vaccines, inserting microdots, microchips, or nanobyte, they relegate you off to the conspiracy theorist quarantine.

I prefer Star Trek – Scotty Beam Me Up – I had enough of this planet!