The economies of France and Italy shrank in the fourth quarter of 2019. There is stagnation in Europe. Negative signals are also coming from the Far East. The German auto manufacture, which is the backbone of the German export-economic model built upon the old mercantilist system (selling goods to other people), is also in a bearish position. Production of cars, the largest export product in a German manufacturing sector dependent on exports, has fallen by about 16% over the past year. In the first half of 2019, German auto production is down 12% year-over-year. In fact, German auto production has hit a 23 year low. Then add the climate change insanity that Europe has adopted and they clearly seem poised to induce economic suicide in Europe.

While the politicians are only concerned about cementing Europe as a new federal state, the very idea of the European Project is proving them very much wrong. With Britain exiting the EU, they will find a huge hole in their budget which Germany will not agree to. This means that either the EU breaks up, or they are compelled to raise taxes on the remaining member states. Germany will still demand austerity and remain against a consolidated debt or a national debt for the EU especially one that runs perpetual deficits. 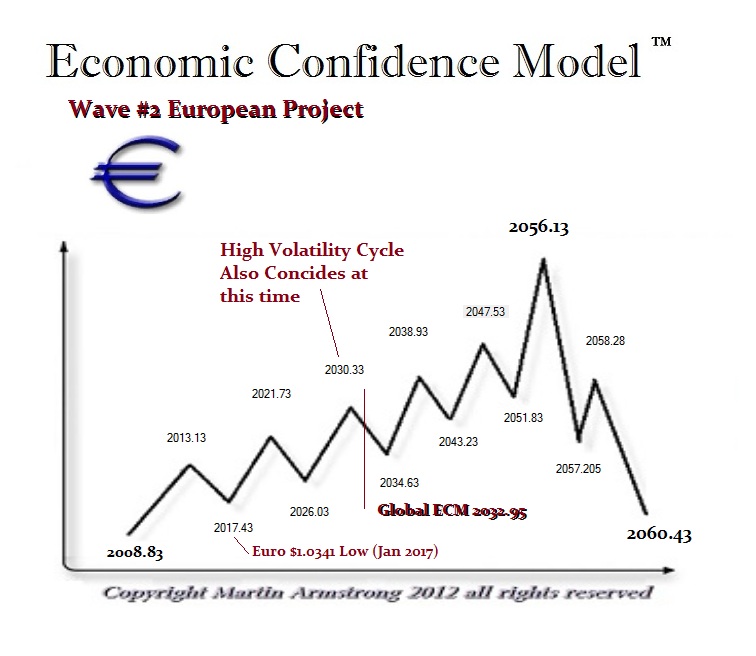 We are entering a new long-term business cycle wave that began for the European Project in 2008.83, but the Global Economic Confidence Model has also turned here on January 18th, 2020. As you can see, we are headed into a Euro turning point of 2021.73. The pressure of maintaining the Eurozone will intensify as we now head into 2021. Indeed, 2021/2022 will be a critical turning point in world currencies.