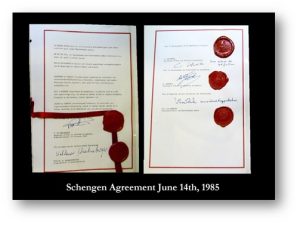 COMMENT: Dear Martin,
you are once more right with your view’s. EU’s Schengen agreement is going to die. From May 1st on, anybody in the EU has to carry an “A1 Certificate” if he or she is going on a business trip to avoid “social insurance fraud”. If not, you could be fined by up to 10.000,00 Euro.
Best regards
AC

REPLY: The cornerstone of the EU was to be the freedom of movement to create the United States of Europe. This became known as the Schengen Agreement to create a borderless Europe signed on June 14, 1985, between five of the then ten member states of the EU. It proposed the gradual abolition of border checks at the signatories’ common borders. Measures proposed included reduced speed vehicle checks, which allowed vehicles to cross borders without stopping, allowing residents in border areas the freedom to cross borders away from fixed checkpoints, and the harmonization of visa policies. However, this Schengen Agreement did not come into effect until March 26, 1995 (1995.232). It eliminated border checks among its members and allowed foreign visitors to travel throughout the area using one visa.

Britain has been preventing those non-EU citizens with Schengen visas from freely crossing the border into Britain. Someone from Ukraine with an EU visa cannot travel to Britain and subsequently to many former British Commonwealth states, such as the Bahamas, even for a vacation. Switzerland also is experiencing an anti-EU immigration trend.

This is what they always do. They cannot repeal the Schengen Agreement, for that would defeat the entire premise of the EU in creating the United States of Europe. They are using health insurance to prove you are really a citizen or legitimate resident of your country. It is always the same — wordsmithing. This is not my simple opinion. The Schengen Agreement was dead once they allowed the refugees into Europe.