Italy Sends it Budget to Brussels 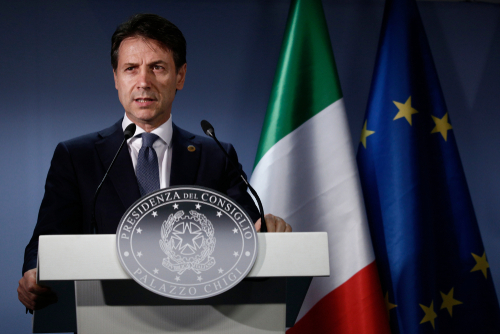 The Italian Government has gone and adopted the controversial draft budget for the coming financial year. Prime Minister Giuseppe Conte said that the budget plan would keep the government’s promises, and keep the public finances in order. The government has now forwarded the draft to the EU Commission in Brussels for consideration. This is where we will see the clash of cultures between the people and austerity that focuses on the debt holders – not the people.

What is unique in this budget is the introduction of a basic income for the poor, an earlier retirement age promised during the elections, and tax relief for the self-employed. The losers will be the Banks who lose tax breaks. In order to finance these costly campaign promises, the government plans a significantly higher level of new debt in 2019 than had been promised by the previous government. Therein lies the clash with Brussels as Italy embarks on a confrontation course with the EU.

Under the EU rules, the upper limit for the debt ratio of no more than 60% GDP is the criteria set by austerity. Italy is already sitting on a debt of more than 130%. Only Greece comes in the Eurozone on an even high percentage ratio. Economy Minister Giuseppe Tria made a public statement that he was confident that he could explain the budget to the European Commission. Italy must increase its spending to get the economy off the ground. The deficit target of 2.4% of GDP is “normal”.  He has publicly stated that the “idea that this budget could blow up Europe is completely unfounded.”

The economic guidelines of austerity are completely unreasonable. In joining the Eurozone, the German debt converted with no appreciable impact. In southern Europe, converting their past debts to Euro doubled their “real” past debt obligations. Previously, their currencies naturally depreciated ensuring that debt repayment was always with cheap currencies. Under the Euro scheme, the rise in the Euro from 80 cents to $1.60 imposed a tremendous deflationary wave upon southern Europe from which the damage has been inescapable.

« GDPR Creates an Overwhelming Bureaucratic Nightmare in Europe
Why British Politicians Argue to Remain in the EU – PENSION!!!!!!!!! »