Is Europe Deliberately Crushing their Economy for the Great Reset? 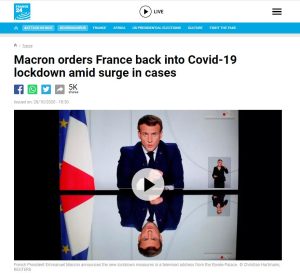 COMMENT #1 (France): What the hell is going on?! This is so frustrating. I want, no, NEED someone to shed some real, unbiased light on this. Do you have some available?

Hope you’re ok. Jealous of you being in Florida!! (Assuming it’s still relatively sane over there.)

As you will no doubt know, Europe is heading back to total lockdown everywhere. Eastern Europe has been the worst, actually. They’ve gone totally tyrannical, ever since September.
Masks mandatory everywhere (incl. on the streets, parks, etc), cafes, restaurants, all culture, many/most shops and “non-essential” businesses now closed in most areas, and total lockdown in places like Czech Republic, Slovakia, Slovenia, etc.
There have been some small-scale demonstrations in recent weeks in Bratislava, Prague, Poland, etc – and the cops (and in some cases military) have used brutal force against the peaceful protesters (water cannons, tear gas, firing rubber bullets, etc). In Slovakia, they’ve threatened to jail people who participated, because in “state of emergency” long jail penalties can be given to anyone disobeying the rules that ban public/social gatherings, etc.

Also, Slovakia is doing mandatory “covid” testing of the entire population (except kids under 10 years of age)! It’s not technically mandatory BUT, anyone who will not have the document attesting a negative test result (which people must carry with themselves at all time in case they’re stopped by police, and also to be able to go to work or enter any shop) will be deemed “positive” and not allowed to leave home at all! So, if you don’t get tested, you’re screwed – not able to go to work, to buy anything in a store, or even to leave home because cops will be patrolling and asking for the document.

As I’ve told you some time ago… Westerners are under the illusion that people from formerly communist/totalitarian countries would resist tyranny. Well, they don’t. The VAST majority of people in all these countries are ok with all this tyranny; they think it’s for “public health” (aka for their own good), and they turn not on the tyrannical government but on the few who don’t want to obey these evil, anti-human, tyrannical mandates.

Aside of perhaps China (with their evil total monitoring, social credit score, etc etc) Slovakia is now literally right on top of the most tyrannical countries. No test, no leaving home! (And, of course, soon the “test” will be replaced by a “vaccine”, then a chip, etc – and everyone will get injected because otherwise they will have to be locked in at home and starve to death!)

Most people didn’t believe Europe would go back into lockdown… well, here we are. And it’s only October – the flu season hasn’t even properly started yet.
We’re soon going to envy those who lived under Stalin or Mao.

Depressing as hell….I don’t want to live in this sick tyrannical world. 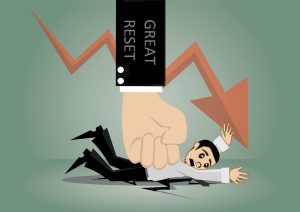 REPLY: I have friends around the world who are all writing in and becoming very concerned. Europe is intent on pushing the Great Reset, using this virus as the justification to crush the economy to force people to ACCEPT their Guaranteed Basic Income and to usher in the Great Reset. Instead of revising the system properly, they have taken the totalitarian approach to retain power. I seriously question if there will be any elections post-2024 and there is a high probability that we will see international war by 2027.

There is absolutely NO possible way these people do not know what they are doing. This is a deliberate action to use COVID-19 to crush the economy and the people into submission. If you simply look at the European share indexes, you see nothing remotely similar to the United States. They are down on average 30% for the year and they look like death warmed-over.