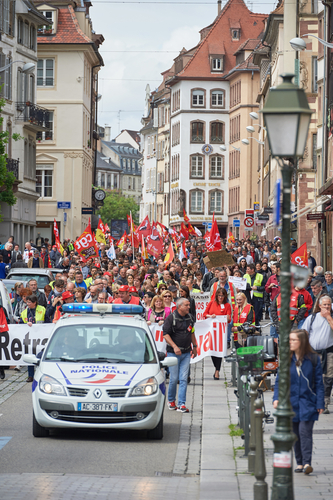 Our sources in France are unanimously warning that a major socialist union uprising is building in France and could erupt rapidly. The unions in France are notorious for being the most socialist, highly Marxist, in the entire world. To get their demands, they will go anything. They even kidnapped the head of Goodyear until he yielded to their demands. They act more like Stalinist rebels who ignore laws and it is always just about them. Employers are evil capitalists in their book.
This time the uprising is building over proposed labor regulation reform supported by Hollande, who is a socialist himself. President Francois Hollande’s government realizes that France is doomed internationally and unemployment will only rise. His labor reforms are designed to make it easier for companies to hire and fire employees. As it stands, it is next to impossible to fire anyone. As a result, companies are not hiring.

Even the socialist MPs refused to vote for it. In France, if Parliament does not do what the President commands, he need not rely upon them. Prime minister Manuel Valls employed a constitutional tool that allows him to bypass the parliament altogether. This has now resulted in rising social unrest. A real confrontation is building. The question is can France become competitive globally at all?

The trade unions are beginning to block fuel supply to shut down the country. They managed to shut down five refineries. They are also looking to suspend nuclear power plants until they get their demands. If you are looking to fly to Paris, forget it. They will shut down the airports, the trains and all the public transports in Paris as well. Even the
agricultural unions may join the movement. The unions are promising unprecedented violence the first week of June.

Hollande is losing support and he is also unlikely to survive elections next year. The French, like everywhere else, are fed up with government. Th unions do not want to give anything back in France so this will contribute to the overall bearish view for the Euro moving ahead.
The fraud in Austrian elections that the “establishment” candidate wins by a mere 31,000 votes to keep Austria in the EU is also fueling the sentiment throughout Europe that any hope of a fair election to regain one’s country is not realistic. The French are worried that the 2017 elections will be rigged as well.

All our direct sources in France are warning that the country is disgusted by Hollande and the “establishment” government in power.

« BREXIT: What Would Happen to Brits Living in EU?
Will Britain Stay or Go? »